Air hockey is a dynamic game with an increasing interest surrounding it. While more and more people love playing this game for fun, there are also a lot of people that take a more competitive approach. Learning good attack strategies and implementing successful air hockey defense tips into your game is going to be crucial to your success at an air hockey competition.

Some of the most important defense tips and tactics are:

Before we dive into this topic, make sure you check out my Buyer’s Guide on some of the best air hockey tables for this year! There you will see my top picks ranked from best to worst along with a ton of tips on how to find the ideal table for your home.

Keep Your Eyes on the Puck

Tracking the puck is one of the key elements of air hockey that you absolutely need to master. Most new players make the common mistake of tracking the puck with their mallet which often leads them to create huge gaps and openings in their defense without them even realizing it. This happens mainly because your attention is focused mainly on the tracking process and you can often miss some of your opponent’s next moves.

So, instead of tracking the puck with your mallet, exercise tracking it with your eyes only while maintaining a good position with your mallet (more on that later). Using your eyes will be much easier, often faster, and will leave you with time to react to the incoming puck. Moreover, you will have more time to prepare a counter-attack strategy and will be more aware of the attacker’s movements. 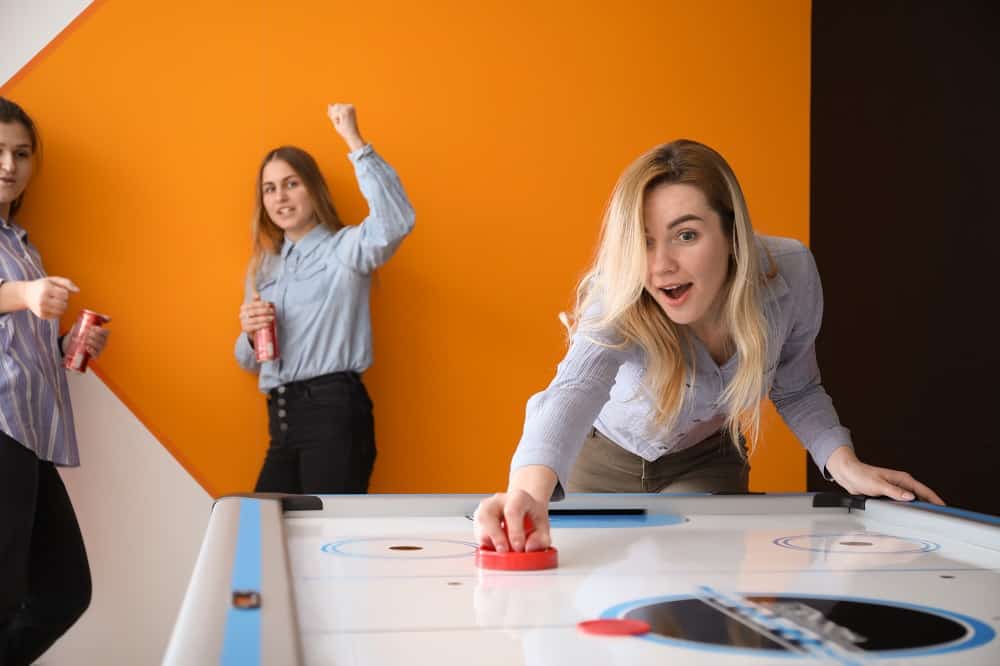 When it comes to defending your goal, the most important thing to add to skillset is a defense method such as the triangle one. Holding your puck on the line is semi-effective but it gives you less time to react. Furthermore, on-line defense or even standing 1-4 inches in front of the goal makes you prone to ricochetting the puck straight into your own goal. Even without implementing a certain method, the major thing to learn is to be smooth with your movements. Rapid movements leave openings and can end up causing you to make a lot of mistakes within a single game.

If you’re looking for good air hockey pucks and paddles, make sure you visit my guide on that topic. Now, let’s talk about the most commonly used defense method in air hockey…

This method deserves a section of its own since it is unique and effective in various scenarios. You perform this technique by creating an imaginary triangle between the two points on both sides of the goal and your mallet. The mallet should be held around 10-14 inches from the center of the goal, ultimately forming the front edge of the triangle. The goal then becomes the base of that said triangle.

The main strength of this method is against straight shots from the other side. This is because you don’t need to move a lot to block a shot from most frontal angles. You can keep your mallet at either one of the three points of the triangle depending on where your opponent is taking the shot from but most people prefer keeping the mallet in front of the goal all the time, which is fine. The other key thing to remember here is to maintain your triangle defense steadily throughout the game. Fluctuations in your mallet movement or going too far off sideways can open a lot of vulnerabilities on each side of your triangle. As time goes by, you will learn how to stick to your triangle and even predict some of your opponent’s moves so that you can position your mallet better.

One major error would be holding your mallet somewhere along the three sides of the triangle. That will make it harder to get back to the front edge and can cause huge openings on the opposite side of your triangle defense.

If you want to learn some cool air hockey tricks you can use to impress your friends, make sure you check out my article on the topic!

Can you block the goal in air hockey?

Yes, you can stay on the goal line as much as you want but as I mentioned that is often a poor strategy as it leaves a lot of room for error. While holding your mallet 10-14 inches in front of your goal is often the best way to guard the whole triangle area in front of it, most people prefer standing on the line hoping they will block the puck at the last moment.

How fast can an air hockey puck go?

One thing that people often underestimate is the speed of the air hockey puck. You might have noticed that some pucks travel faster than your eyes can track them when they are hit really well. This is because most good shots can result in speeds over 70 miles per hour!

What can I use to make the puck slide faster?

While there are a lot of things you can use for your air hockey surface, the best and the most risk-free method is using silicone spray directly onto the surface after cleaning it thoroughly.

At the end of the day, no matter how many defense tactics you learn, the thing that will improve your defense the most will be a constant practice. Working on your mallet grip and counter-attacks are the second and third steps that follow after building a solid defense strategy.

Learning some of the most important air hockey defense tips will be crucial to your success, as each game consists of equal amounts of attack and defense. While you can always bet on a more defensive strategy, the key to becoming a good air hockey player is to mix your attacks well with your game plan. The two major takeaways are to keep your eyes on the puck and to defend your goal by standing in front of it rather than on it.