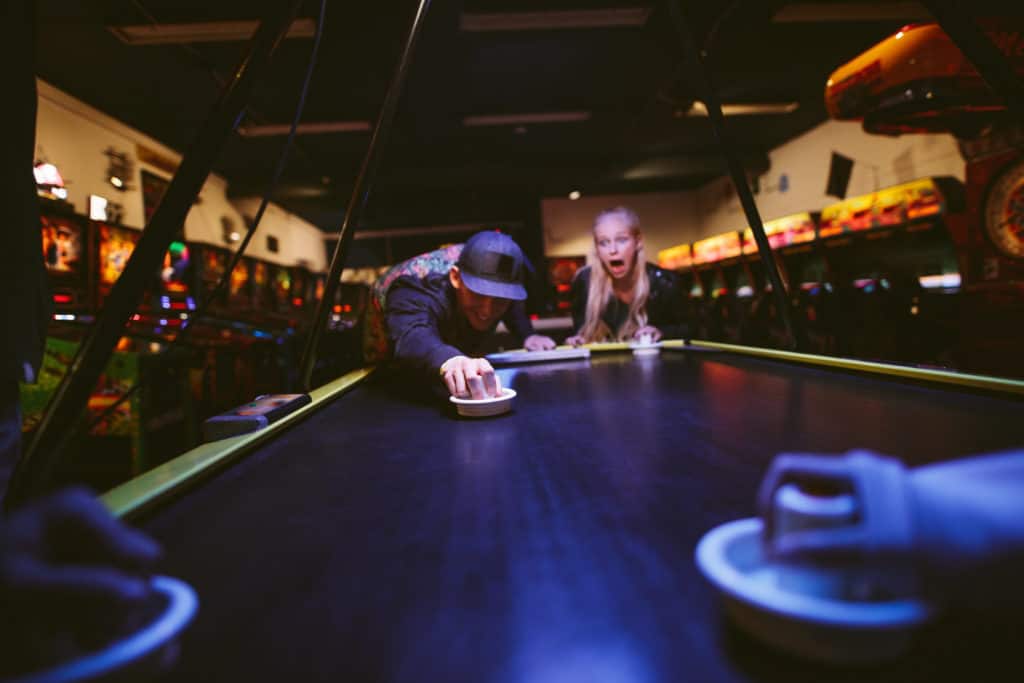 Do you need to learn air hockey tricks in order to get an edge over your opponents? Our air hockey tips will teach you about some of the best trick shots and offensive strategies, how to hold the hockey mallet properly, and how you can easily maintain possession of the puck.

Key Takeaway: Our guide will teach you the importance of using an offensive strategy and how to make some killer trick shots, so you can score again and again on your opponent. Using basic techniques, practicing, and perfecting your offensive strategy will get you far in the game of air hockey and can essentially make you unbeatable.

The Right Way to Hold a Striker

Holding the striker the right way is an important basic skill to learn in order to get the most leverage when you’re making a shot. Beginners tend to hold the striker using their entire hand, which is not the correct way to grasp it. Holding the striker using your whole hand isn’t recommended because you’ll end up having to use your whole arm in order to move it. This will hinder your speed and can even prevent you from making the whipping motion, which is what you need to do in order to quickly return a shot. The right way to hold the striker involves placing a few of your fingers inside the striker, as opposed to wrapping your entire hand around it. Using just a few fingers can give you more control, allows you to counter a serve faster, and can help you whip the puck across the table at lightning speeds.

If you want to win an air hockey match, then you need to brush up on your offense. You can win a game of air hockey based on scored points, so if you’re not able to land the puck in your opponent’s goal then you’re going to lose every time. Our basic strategies will help you to create your own unique strategy, one that will bring your opponent to their knees.

Our following tips will help you take your offense up a notch:

Drifting the puck is pretty simple and involves sliding the puck in one direction, gently. As the puck is gliding over the surface, you’ll aim and shoot the puck in the opposite direction. This will help you to make a goal before your opponent even knows what’s going on and has no time to adjust their offense. As an example, if you’re drifting the puck to the left, your opponent will adjust in order to block your shot, but before they have time to readjust their striker, you’ll shoot the puck to the right. This move gives you just enough time to mash your puck into their goal, so you’ll need to practice this move in order to get your timing just right.

Drifting can also be used to set up a trick shot. These shots are meant to trick your opponent. Moves such as the one two, casting cut, and the chase shot, will help you easily score on the opposition every time.

This trick actually consists of two shots in one. This move is designed to confuse your opponent. With this move, the puck will look like it’s bouncing out of control, but in reality, you’re strategically hitting the puck onto the bank and from there it will quickly make its way to their goal.

To execute this move, you must hit the puck toward your opponent directed toward one of the corners. When you execute this move correctly the puck will hit the top, then the bottom of the corner. As the puck moves back towards you after it bounces twice, you can immediately shoot it to the spot on the rail where it will then bounce right into the goal.

When the puck is making its way back to you, you’ll need to avoid stopping or slowing the puck down. Doing so can make this move too predictable and will ultimately tip your partner off that they need to adjust their stance.

This move is much simpler than the one two. However, it’s still a great trick shot and one that’s considered the most effective. This shot is only used after the opposing player has scored. Most of the time beginners will be very confident after they make a goal. The casting cut will wipe that smile right off their face.

To do, once your opponent has made a goal, float the puck diagonally toward the opposite direction of where you plan on shooting it in order to make it in the goal.

When the puck is drifting, use the striker and shoot it into the opposite corner of their goal. As an example, if you’re floating the puck toward the left, aim for the right corner.

If you execute this move correctly, then the opponent will be too focused on where the pluck is currently going and won’t expect the puck to be shot in the opposite corner of the goal.

This shot is similar to the one two move in terms of relying on the rails in order to set up your shot. The idea behind this move is to keep the puck in motion in order to confuse your opponent. If you do it right, your opponent’s striker won’t be anywhere near the right place as the puck glides down the center of the table.

To do, begin by hitting the puck off your rail, causing it to go into the opponent’s corner. The goal of the first portion of the move is to get the puck into your opponent’s corner and then back to your corner. The puck will do a couple of bounces on your corner by your goal, then it should move in the perfect position to send it shooting across the table and into their goal.

How to Keep the Puck 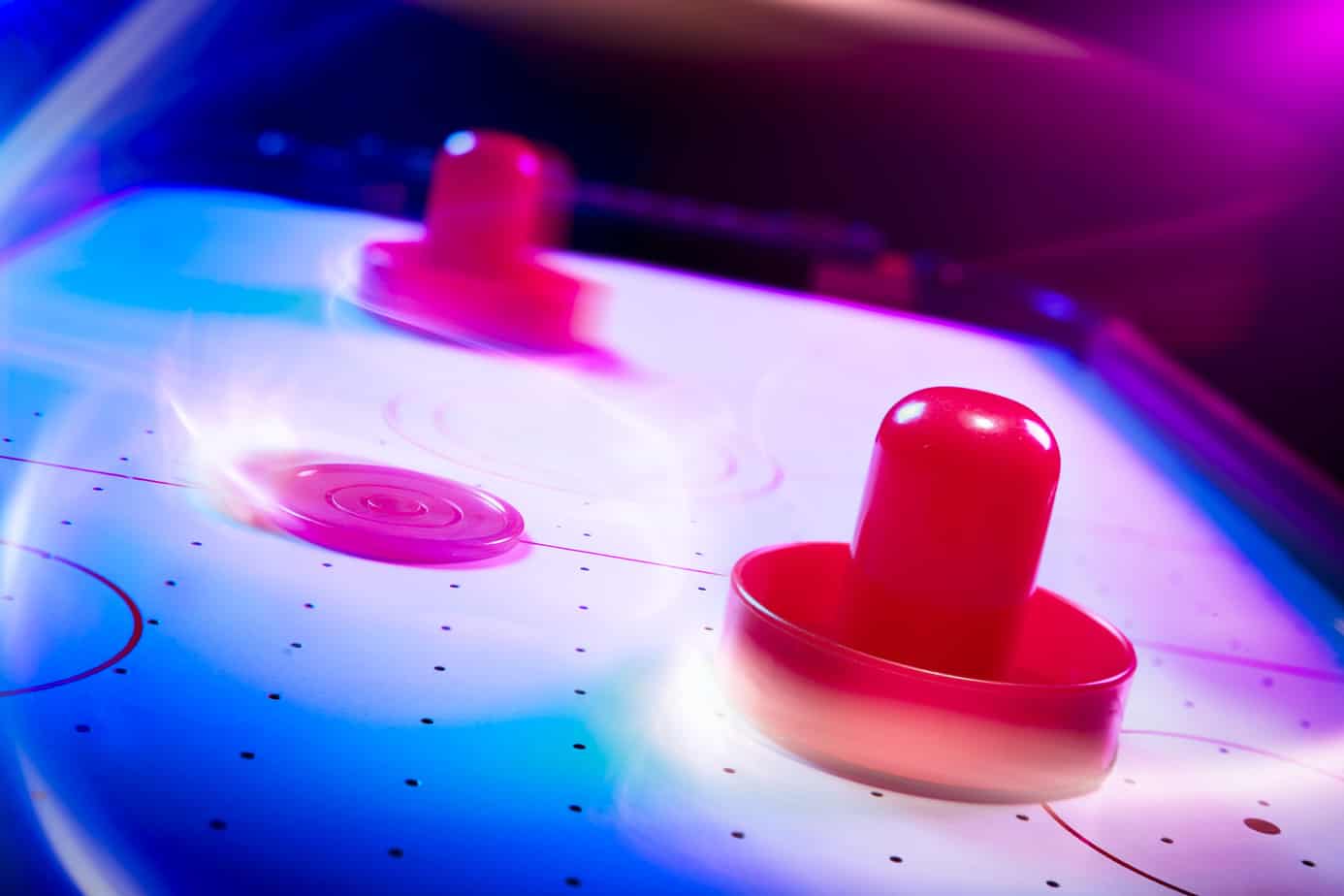 To learn more about compact air hockey tables designed for kid use, click here to read our buyer’s guide.

Beefing Up Your Defense

While using trick shots can be cool and fun, having a solid defense can go a long way towards winning a match.

Beginners often make the mistake of keeping their striker close to the middle of their goal. This is actually a poor defensive strategy because it leaves you wide open for straight shots and trick shots alike. In order to prevent the puck from getting past you, we recommend using the popular triangle defense strategy. This requires you to place the striker above where your goal is. This is usually at the first notch on the table. This will put the striker in the best position to block trick shots.

The triangle will also put you in the perfect position to defend against straight shots. You won’t even need to move the striker much since the majority of straight shots will end up causing the puck to run right into it.

You also won’t need to worry about moving the striker to block an angled shot. All you need to do is slightly shift right to left.

If you want to learn more about air hockey drifting, click here!

We hope our air hockey tricks have given you the tools you need to win and change up your moves in order to defend your goal, take possession of the puck, and use our three top trick shots to finally land your puck in your opponent’s goal. While these moves may seem difficult initially, with plenty of practice you will easily be able to dominate any game, regardless of the player’s skill level. 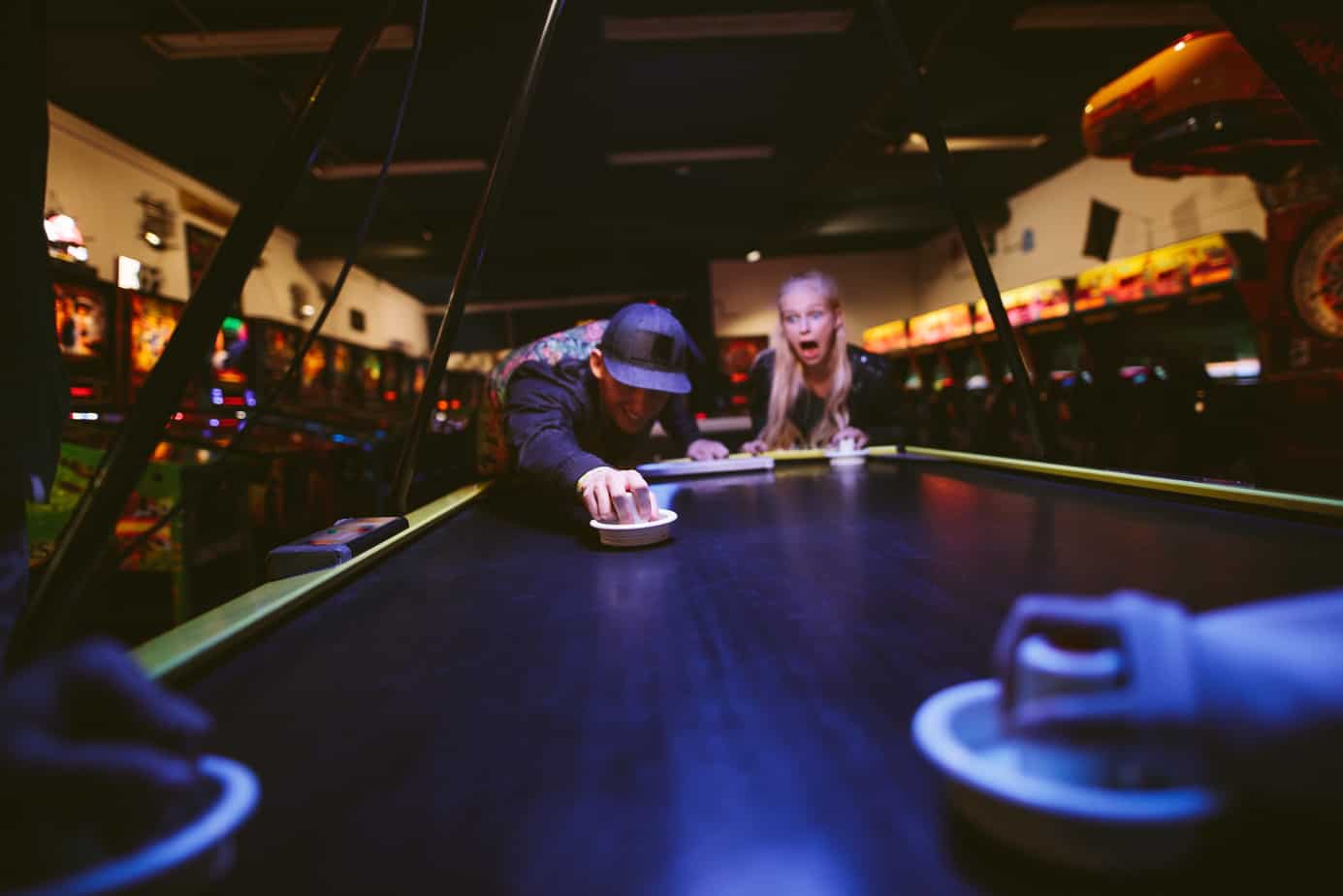 Article Name
The Best Air Hockey Tricks to Impress Your Friends With
Description
Learn how to brush up  on your defense and offense, dominate a game, and check out the best trick shots that can instantly help you score again and again.
Author
Air Hockey Geek.com