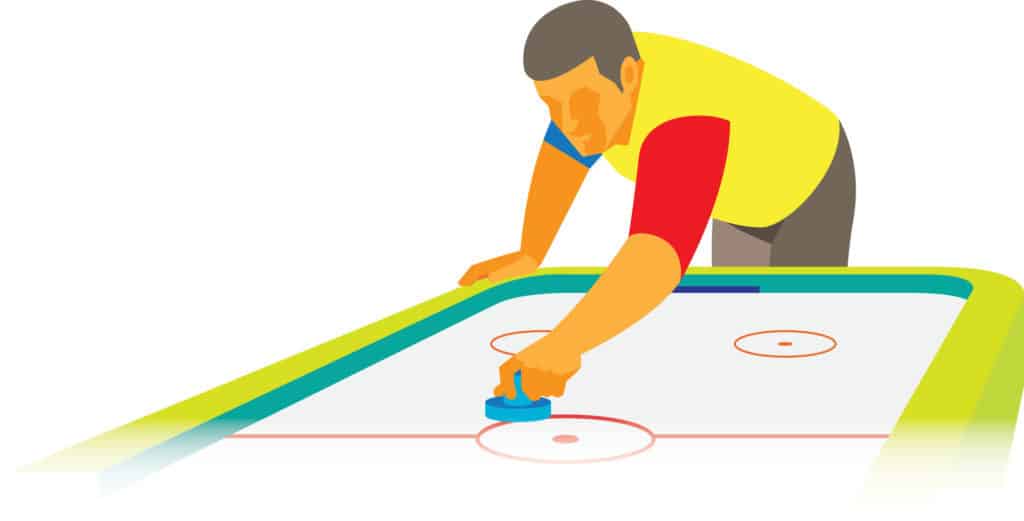 Air hockey tournaments aren’t as common or as popular as they should be, considering the rise in sales many manufacturers of the best air hockey tables can attest to. However, there are some smaller organizations in North America that host tournaments a few times a year. These organizations stick to the traditional rules of the game.

Each July, the Air Hockey Players Association hosts their annual championship tournament. This tournament takes place in Colorado Springs, Colorado and each year, enjoys an even bigger turnout than the year before. This tournament allows players from all over the world to participate, and it’s the only tournament of its kind, to date. Currently, the AHPA is allowing tournament registration for amateurs, so if you’re serious about going up against the best players in the world, now is the time to enroll.

This championship event hosts a variety of divisions based on age, gender, and skill. There are also divisions for single and dual player events.

Whether or not a player will qualify for entry into the professional championship division will depend on their rating as a player, which is determined by the Air Hockey Players Association ranking. The event closely follows the standard rules of the game.

Each year, the USAA hosts the World Air Hockey Championships which often takes place the first month of spring. This tournament is open to players all over the world and includes games for singles and doubles.

They offer a reasonable entry fee for players, based on skill level. For the master level singles tournament, the fee is around one hundred dollars. Experts and pros only have to pay a fee of seventy dollars, while the amateur fee is a mere fifty dollars. This tournament is open to everyone and is categorized as a double-elimination tournament.

In terms of prizes, the USAA awards trophies to the top players in each of the events, in addition to a cash prize. Everyone that enters will also receive a tournament commemorative T-shirt.

Air Hockey Tournament Rules for the AHPA and USAA

The tournament rules of air hockey are slightly different than traditional air hockey played between you and a friend. To start, the table played on must be broken-in and approved by the board of directors. The type of overhead lighting used is also closely regulated.

The types of mallets used must meet certain requirements such as weight, color, and material. As an example, the mallets cannot weigh more than six ounces.

The USAA currently only approves three pucks for tournament use. This includes the following:

Additionally, the pucks cannot be changed during a match without the consent of both the players. However, the referee can also insist on a puck change if there is an issue with its playability.

In terms of design, the puck is required to have a single layer of white plastic tape on the top.

Scoring in a Tournament Setting 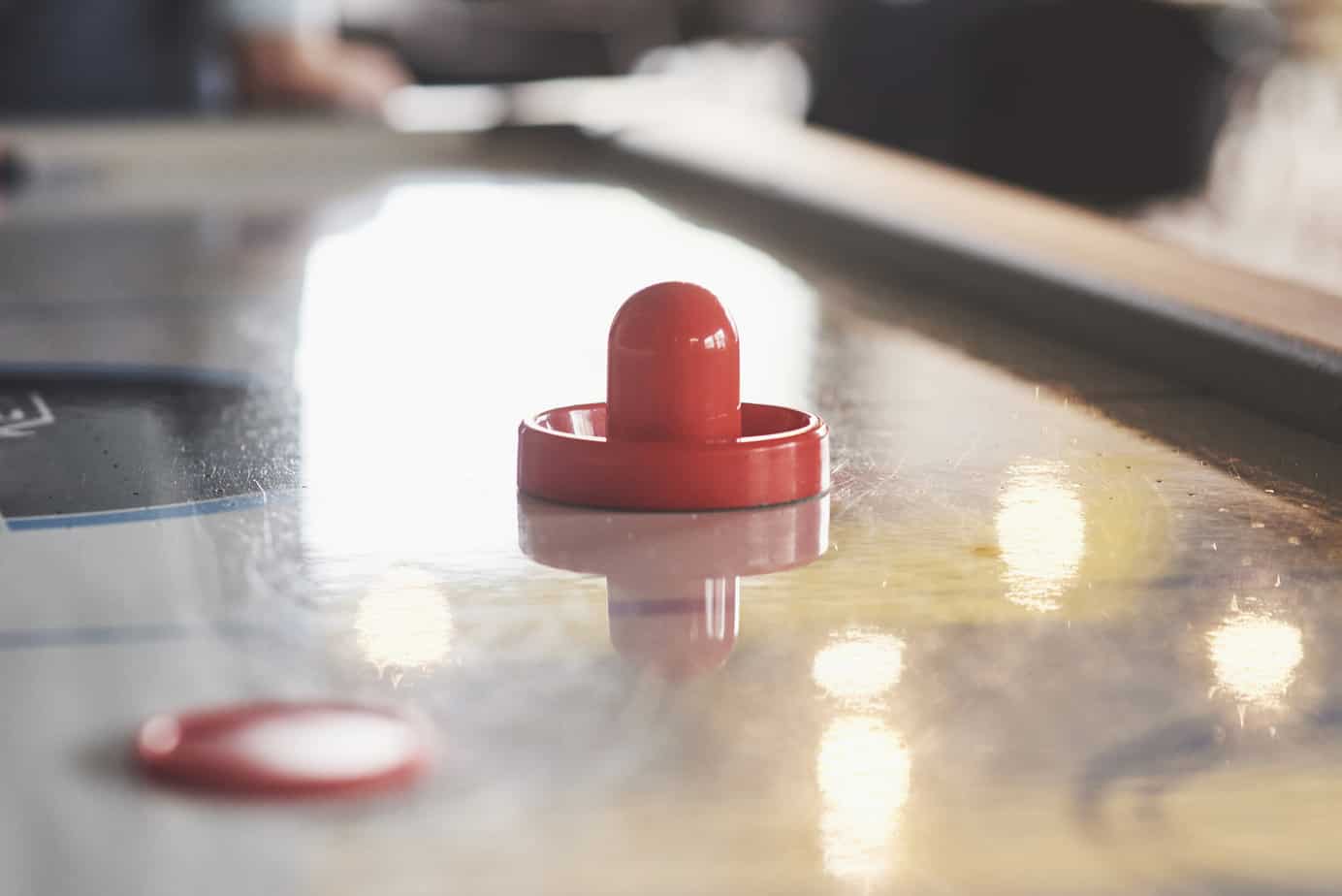 If you’re not sure whether air hockey is the game for you and you’d like to see some players in action, finding a local tournament is going to be your best bet. Unfortunately, in most states, you may have to plan on a serious drive if you’re seeking out a tournament since they’re not as common as you’d expect them to be. As I mentioned earlier, the tournament hosted by the AHPA is by far the most popular, but they only offer one major tournament a year. In terms of local action, you may have some luck finding others who are interested in this exciting sport by joining online forums.

Joining a local league and entering tournaments at this level can be a great way to build your skills and boost your confidence. With enough practice, you may be ready for the next upcoming tournament hosted by the USAA or the AHPA.

Create Your Own Tournament

If you’re having trouble finding a tournament in your neck of the woods, why not start your own? Finding a location for the tournament will be the first and most important step. You’ll want to find a place that already has a tournament quality table unless you plan on renting one or buying one or more. As long as the location has at least one table, you’ll be ready to go.

Once you’ve chosen a location, speak with the owners and discuss your interest in starting an air hockey tournament. Many small businesses may be into the idea since it means more traffic for their business.

If the owners agree, then you’ll need to begin advertising the upcoming event. This should be done three to four weeks in advance. You can advertise online or you can make flyers and post them around the neighborhood, at local bars, arcades, and any type of family fun center where you’ll find air hockey tables.

On the day of the tournament, you’ll need to bring tournament brackets to keep score. If enough players attend, you can plan on another tournament in the future. However, if there is minimal interest and only a few players show up, don’t be discouraged. Instead, make a connection with each of the attendees and ask them to help you spread the word for the next upcoming tournament.

If you have enough interest, it may be possible to start a bi-weekly or monthly tournament. If these events drum up enough traffic for the business that’s hosting it, they may even be encouraged to purchase an extra table so you can host an even bigger event.

What Type of Air Hockey Table Should I Practice on?

I recommend the ESPN air hockey game table. This is a tournament quality model and one you can use for hours on end and never get tired of. It comes with all the bells and whistles the avid air hockey player will love including leg levelers, so you can adjust the table to the perfect height. This is a full-sized table that comes with corner caps for added safety, LED lights and sound effects, an overhead scoring system and extra strikers and pucks. Basically, this is a package that comes with everything you could want and need in a table that’s designed to improve your game and prepare you for the next upcoming tournament.

This will ultimately depend on the tournament itself. Some will only allow master players to enter, while others will allow players of every skill level to enroll. Many of these tournaments will advertise at least one to two months in advance, which will give you plenty of time to brush up on your skills and learn how to win at hockey. Keep in mind, each tournament will require an entry fee and will also have an enrollment deadline. Make sure you sign up as soon as they begin accepting enrollment.

Air hockey is a very challenging sport and one that’s enjoyed a new level of popularity in the past few years. But it’s also a sport that requires intense focus, fast reflexes, and a good strategy, in order to get an edge over the competition. If you think you’re ready for competitive play, then start researching enrollment requirements and fees.

As you can see, both the USAA and the AHPA have strict rules and guidelines that must be followed during a tournament match. Many of these restrictions can be very intimidating for people who have never enrolled in an air hockey tournament before. If you’re fairly new to the game, I recommend finding a league you can join and starting off by entering local tournaments where you can meet and play against other air hockey lovers of the same skill level.