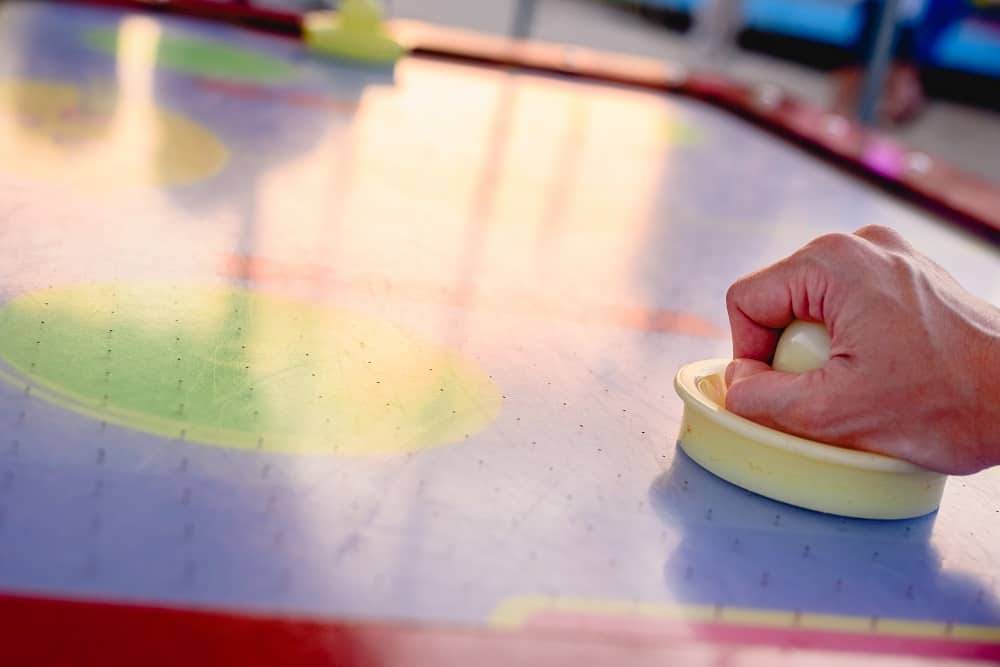 Your air hockey grip isn’t just about holding the mallet tightly in your hand, there’s actually a special way to hold it that can improve your performance and increase your control over the puck so you can dominate a match. Using the best pucks and paddles, the proper grip, and some basic playing strategies, you will notice a significant improvement in your shooting technique and offensive and defensive moves.

When you’re holding the paddle, you don’t want to just grab it by the handle. This can limit your swing options. Instead, you should place your fingers between the outside edge of the mallet and the back of the handle.

The mallet’s handle design gives the impression that holding onto it with all of your fingers is the best way you can shoot the puck. Unfortunately, this isn’t the case. A professional player often develops a better way to hold and maneuver a mallet.

To improve your control over the puck, you must place your ring, index, and middle fingers between the back of the paddle and the mallet’s handle. Rest your fingers in what’s referred to as the alley, placing the knuckle of your middle finger against the handle of the mallet.

This type of grip will give you better wrist action, keeping your arm flexible and allowing it to make better shots without using too much energy.

Using the proper stance is just as important as holding the mallet properly. An air hockey player’s stance will play a huge role in their success as well. You’ll want to stand with one foot placed forward with some flex in your knees. This will provide better freedom of movement and improved shot accuracy.

The next thing you need to keep in mind is the amount of force you use when you hold the mallet. In addition to holding the mallet in the correct position, the strength of your grip can also impact the power behind your shots. If you grip one too tightly this can slowdown the puck speed. A weaker grip can negatively impact your shots and may result in deflections because the mallet may slip out of your hand. Of course, this can significantly decrease your chances of making a goal.

Applying too much pressure when you’re holding the mallet can also have an impact on shot accuracy and your overall performance. When you use too much pressure, it can add friction between the mallet and the table. This friction can end up slowing down the puck and mallet’s movement, which can cost you a great shot or a goal. If you don’t use enough pressure, then your shots may not be as accurate as they should be. The correct amount of pressure allows you to develop your game to land those perfect shots.

You need to find the right balance between grip strength and the pressure you use when you shoot a puck. In an intense match, a player may begin to sweat, which can loosen their grip on the mallet. The other player may hold the mallet too tightly when they’re playing under pressure. Achieving balance during a competitive match isn’t exactly easy, but it’s possible. The key will be to remain calm and play with commitment and resilience without letting the pressure get to you.

Playing with the Right Grip

By now, you know that finding the right grip is crucial. Your grip on the mallet can mean the difference between losing and winning. Of course, it can take a lot of practice before you get the hang of holding the mallet like a pro. When you hold the mallet, it should feel natural and comfortable as you maneuver the puck around the playing surface. Be sure that you dedicate time to improving your grip technique during practice, so you can experiment and determine which position is best for you.

How the Pros Do it

Pros already know that holding the mallet correctly is the key to a good shot in air hockey. The biggest reason why holding the mallet using your entire hand is a bad choice is because it will take your entire arm to power the mallet, which means you will not be able to move it quickly and you’ll be unable to create a whipping motion, which is essential for maximum speed.

Some players will wear gloves in order to minimize the impact felt from the puck and to improve their grip. The number of fingers you use and whether or not you want to wear air hockey gloves will all boil down to personal preference. Some players may even choose to tape their fingers to the mallet itself. Based on the rules of the game, as long as the fingers do not interfere with the puck this is actually considered legal.

How a Hockey Table Can Impact Your Shooting

Every air hockey table is different, in terms of balancing, suspension levels, and surface smoothness. Playing on a new table can impact how you hold a mallet, because you may need to apply more pressure and tension to move the puck across the table. A table that’s regularly used by the public won’t be as well maintained as your table at home. Learning how to compensate for the differences in playing surface smoothness or size can improve your playing style and your versatility as a player. You may even need to adjust your grip based on the size of the mallet. Some public places that have air hockey tables may not use regulation sized mallets, so the mallet’s may be smaller or larger than what you’re used to.

You will not be able to perfect your air hockey drifting technique until you first learn how to control the mallet. Drifting is a simple technique that pushes the puck in a single direction. The puck will slide across the table and you’ll shoot it in the opposite direction and score goal before your opponent is able to adjust or anticipate your move. If you’re drifting correctly, you’re your opponent will need to adjust their mallet slightly to block your shot, but before they are able to readjust back to the center, you’ll have a small window in which you can smash the puck into their goal. Holding the mallet with the right amount of tension will give you total control over it and will allow you to achieve this type of fake out move. Without practicing your grip, if you try to drift, your moves will look sloppy and uncontrolled.

Drifting can also be used for trick shots.

A trick shot is designed to deceive the opponent. But just like with drifting, if you don’t have control over the mallet and you don’t know how to properly power your shots, your moves will be predictable, and your technique will be sloppy.

These shots are designed to throw off an opponent because to them, the puck looks like it’s just bouncing around all over the place. However, if you’re able to control your mallet and power it properly, then you can place the puck onto the back, then shoot it into their goal.

Don’t stop or delay the puck when it comes back at you since it will make the shot more predictable, giving the opponent a chance to block your shot.

This move is much simpler than the one-two shot, but it’s very effective. This shot is meant to punish an opponent by catching them off guard. To do, you’ll need to:

This shot relies on the rails for the shot’s set up. The goal here is to confuse your opponent by keeping the puck moving on the rails. If you execute this move correctly, the opponent’s mallet will not be in the right place as the puck slides down the center of the table.

To execute this move, you’ll need to:

At this time, you’ll shoot it across the table into the opponent’s goal. You’ll want to shoot it directly down the middle or into a corner of the goal.

Maintaining Possession of the Puck

To maintain possession of the puck, you’ll hold your mallet using the proper form and brace it while slightly moving it back to catch it. This is why it’s so important to use the proper grip. If you don’t hold the mallet correctly, you will not be able to brace the mallet for a powerful trick shot.

If you have the right size mallet, you’ve found a grip that you’re comfortable using, and you’re still finding it difficult to execute trick shots, the problem may be that you’re not practicing enough, or when you practice, you’re not practicing with someone who is challenging you. Try to dedicate practicing puck control for at least an hour a day. Avoid practicing with the same person or players who are at the same skill level. During practice, you need to challenge yourself. If you’re playing with another beginner, someone who is also struggling with the basics, then you will never improve.

Using the proper air hockey grip is the foundation upon which all your moves will be built on. Without the right foundation, you’ll never have a solid strategy to rely on, you won’t be able to execute challenging trick shot, and your opponent will score goal after goal.

Using the proper grip, you’ll have more control over the puck, the match, and the pace of a game.