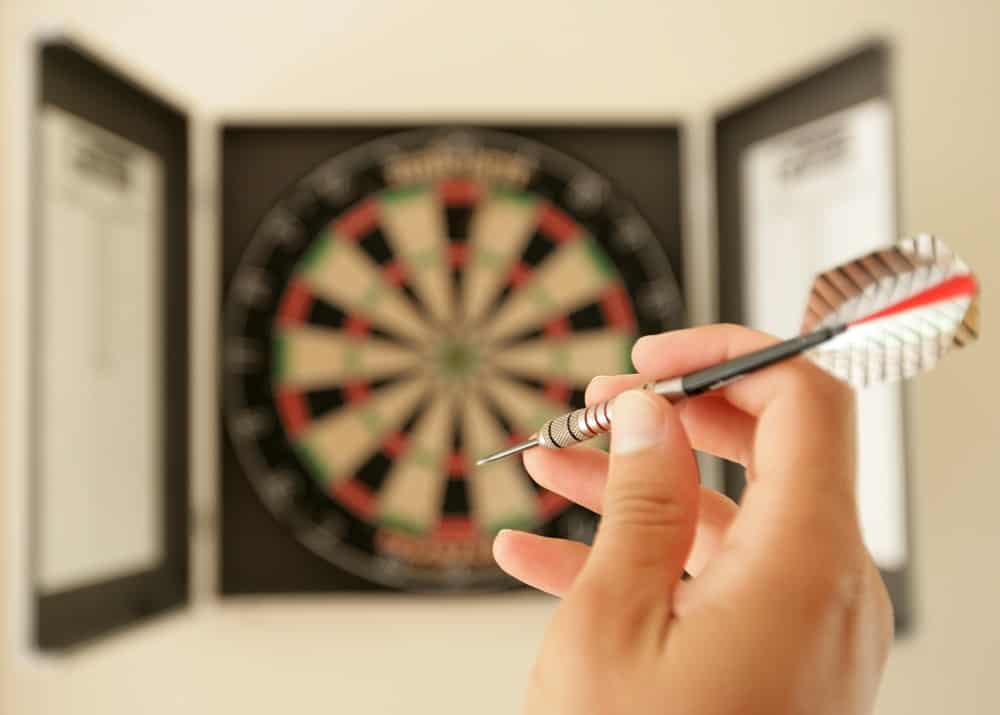 You’ve most probably heard of “the yips” in golf players. But what if I told you that professional darts players suffer from a similar condition? It is cleverly named “Dartitis” and is a physical condition that manifests with a loss of motor control over your hand, arm, or wrist. The most obvious sign of dartitis is not being able to release the darts when you have or want to. In other words, this has the potential to ruin your chances at a professional career.

So, what is it? And how can you treat it? Is it even a real medical condition? In this article, we will answer all of those questions! We will take a deep dive into what dartitis is and will also take a look at some of the best ways to overcome it.

Before we go further, make sure you check my guide on the best steel-tip darts for beginners and professionals! In there, you will find the top models for this year along with tons of tips on how to find the best darts for your playing style and taste!

What is dartitis and what causes it?

From a strictly medical perspective, dartitis is a form of dystonia. What that means is that your brain and muscles don’t work well together and your muscles contract involuntarily, causing sudden repetitive movements. The movements of your muscles could also be twisting which is sometimes found in dartitis as well.

With dartitis, the disorder is mainly manifested with these repetitive movements but they appear only in your hands, arms, or wrists. All that results in the inability of the player to release the dart. In almost all cases, dartitis is triggered by a high-pressure situation such as a tournament or a competitive game. It can also happen only within a specific moment in the game. Usually, you’d first experience small episodes of this type of “freezing up” until you can no longer play darts properly at tournaments.

While this can happen to professionals (due to the high levels of stress involved), it most commonly occurs with beginners and intermediates. And that is not because they aren’t good at darts but because they aren’t used to the stress of the game at a competitive level.

What are the symptoms of dartitis?

Typically, most darts players are able to identify dartitis as soon as it happens. There can be certain “false positives” that are due to lack of rest, muscle cramps, and some other conditions. These usually can cause a bounce-out. Still, if you want to know what to specifically look for in dartitis, these are the most common symptoms associated with this condition:

One important thing that I should note here is that every single person is different. What that means is that you might experience dartitis in a drastically different way than most other darts players out there. This is why, in a moment, you will see me discuss that the very first thing you should do is see a sports psychologist or a neurologist. These people will be able to help you as soon as you notice some of the symptoms I just mentioned.

Also, as I mentioned a bit earlier, some of these symptoms can be caused by something else. Bad posture is one of the most common culprits. It can lead to pain in your shoulders or arms. Bad technique, on the other hand, can also lead to pain in the wrists and/or hands. Lack of sleep can cause stress in your life to build up as well which is often attributed to darts players experiencing dartitis.

If you want to learn how to become a professional darts player, make sure you read my article on the topic! 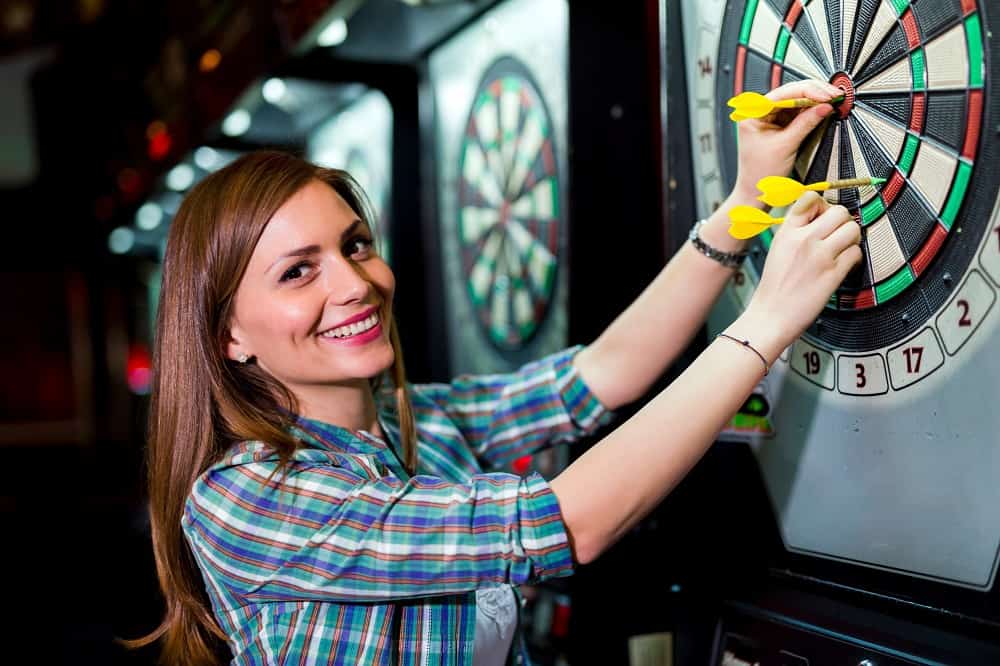 Now that we’ve familiarized ourselves with this condition, it is time to lay out the roadmap that will help you get back on track to training darts full time. Here is what you have to do:

Now, let’s take a deeper look into each of these steps toward a dartitis-free life…

Seek professional help before trying anything else

One of the very first things you should do once you observe any of the symptoms of dartitis is look for professional help. There are two ways you can approach this – as a psychological issue or as a physical one. Typically, sports psychologists work with this condition and they are well aware of the neurological and physiological components of the condition.

Catching the condition early can help you resolve this issue before it develops into something bigger. It can also help you avoid some of the more serious complications. Moreover, the recovery period of a dartitis caught early is much shorter than normal.

Once you get better at darts, actually throwing the dart becomes an automated motion. Focusing on it in order not to mess it up is what ruins your “flow” and can lead to dartitis. Most sports psychologists will help you achieve exactly that – learn what to focus on and what not to. These professionals will also know how to determine whether you actually have dartitis and not something else that is causing similar symptoms.

Work on your mindset

As with all other sports, you should really focus on your mentality. Keeping a positive outlook can greatly improve your game and life. Moreover, this will help you keep calm and will prepare you for all the possible situations during a darts game.

This step is crucial both before and during dartitis. Players that take a more positive approach towards dartitis have a much easier time with it. However, if you take the negative road, normally it becomes much harder to outgrow it and ultimately beat it.

One of the best things you can do in order to improve your positive outlook towards darts is to manage your expectations. Instead of constantly going after a score or a zone that you HAVE to hit, try focusing on something simpler like the actual flight of the darts. Instead of feeling like hitting that 20 is a life-or-death scenario, focus on having a smooth throw, the rest will come by itself.

Work on your throwing fundamentals

Typically, working on your fundamentals or changing your throw altogether is a last-resort type of solution. Some players never recover their previous throw after experiencing dartitis. And that is fine. You shouldn’t be afraid of changing your throw or having it taken away from you by dartitis. Remember, it is psychological. Keep that positive mindset and work on the little details that you want to improve in your throw instead.

It really all comes back to your positive mindset and developing your skills in a stress-free environment. Oftentimes, that requires you to do a few changes outside the darts room but that is strictly individual. Most sports psychologists can help you identify issues outside your darts game that might influence it.

Try taking a break from training

If none of the above works for you, you shouldn’t be afraid to put the darts down and breathe for a moment. And by “a moment” I actually mean a few weeks. There have been cases of professional players completely leaving the game after experiencing “acute” dartitis. However, that happens only in the most extreme cases. In the rest of the cases, taking a few weeks break from the sport can do wonders.

What this time away does is help you reduce the overthinking that might’ve come with practicing or competing in tournaments. It won’t hurt if you throw a few darts from time to time during that process but it has to be natural. You shouldn’t push it. My point is that it has to be natural. There shouldn’t be any stress or pressure involved in your game. It should be automatic and you should want it. Playing against your will is going to affect your mindset and that leads to… you guessed it right – dartitis!

As I already mentioned a couple of times, stress is a huge trigger mechanism for dartitis. It is actually one of the main causes of the condition and judging by the way the player handles stress, most sports psychologists can determine how severe the case of dartitis will be.

This is why dartitis most commonly occurs during high-pressure games, tournaments, or competitive local games. Most players put enormous amounts of pressure on themselves which only gets multiplied by the pressure or stress of experiencing any of the symptoms of this condition. It is basically a very slippery slope and you can easily spiral out of control. This is normally where a break would serve you well. However, learning how to keep calm in stressful situations is not only a darts skill – it is a life skill.

One of the best ways to reduce stress during intense situations is to build your confidence. Train in solitude, focus on your technique, and practice as much as you can before you put yourself back under the spotlight. That will help you be more confident in yourself and thus have less stress on your shoulders. I’d also recommend adding different breathing techniques that can reduce stress and calm you down. You could use those techniques before or during your throws as some professionals do.

Did you know that darts could have an enormous positive impact on your health? Make sure you click here to learn some of the amazing health benefits playing darts has!

Is dartitis only in your head?

Dartitis is a physical condition that could have a mental component. While it manifests with physical symptoms it can indeed initially stem from your head. Many professional darts players report improvements after visiting a sports psychologist. Also, from a purely medical point of view, it is a condition that has symptoms with a lack of any type of specific trauma to the hands or head, so it is technically classified as a psychological problem.

Does dartitis go away on its own?

Unfortunately, the very nature of dartitis is such that it would probably never go away on its own. However, you should be open-minded and more importantly – open to re-learning the techniques that led you to that wrong throw in the first place. Start slow and manage your expectations and you should be able to find your way around this issue!

Dartitis doesn’t present itself with the same symptoms in every player. In fact, it is rather diverse in its manifestation. Some of the most common issues players with dartitis have are hand cramps as well as involuntary muscle spasms. Still, you can also experience pain in your hands (or back and shoulders), and bad posture of your body and/or hands while throwing darts.

Dartitis is a condition that freezes up the hand of most darts players that are put in high-pressure situations. That often leads to bounce-outs, bad throws, or downright inability to finish the game. The first thing you have to do is seek professional help when you experience it. Additionally, try to understand your game, mindset, and throw technique. The most important thing to focus on is how you deal with the stress of the game since that is one of the most common causes of Dartitis!