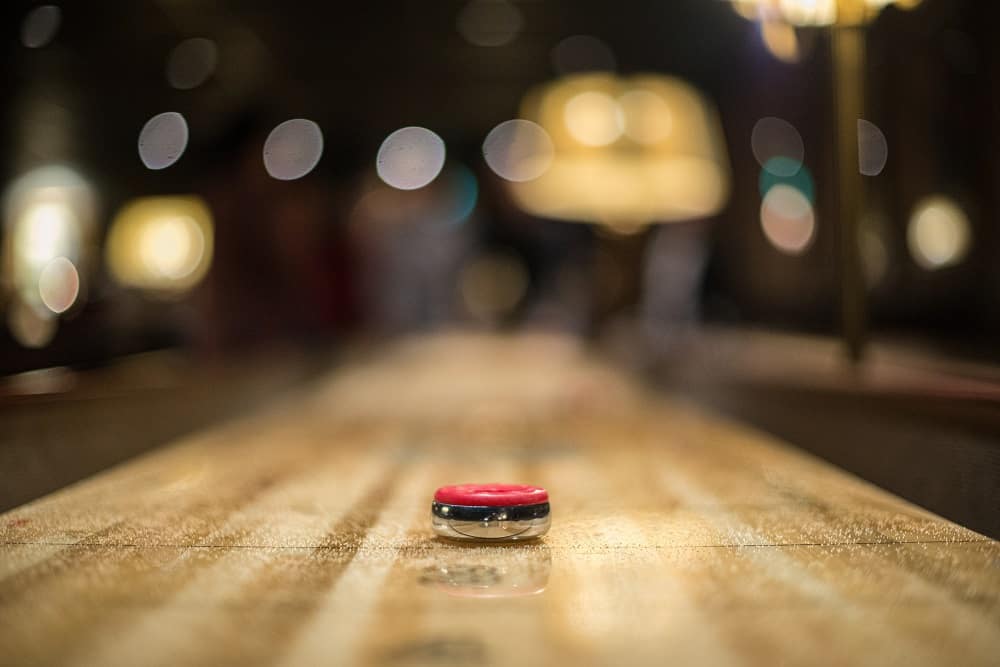 Shuffleboard is one of the oldest games that has persisted throughout the centuries and is still played nowadays in many places across the globe. In the USA, it has been steadily gaining popularity and is now a favorite game among friends and families. There are also countless official tournaments played across the country each year. All that has lead to more and more people getting into the sport.

In this article, we will go over the following shuffleboard rules and aspects of the game:

We will be discussing the rules for both outdoor and deck shuffleboard (knock-off) in each of those categories. After that, we will mention the differences in some of the other game formats such as shuffleboard knock-off, horse collar, and more.

Before we get into the individual rules of the game, make sure you check out my detailed buyer’s guide on some of the best shuffleboard tables for this year! There, we’ve discussed the top models along with all of their pros and cons, as well as a few useful tips on how to buy the right table for your needs. Now, let’s get into this!

The goal of this game is simple – propel your puck into the highest-scored zone on the opposite side of the table. This will give you the most amount of points and will get you closer to winning. Be careful, though, as the puck shouldn’t fall off the table. This will count as zero points and will have no effect on the game. Hanging pieces are scored differently in each shuffleboard variant. In horse collar table shuffleboard, for instance, they can be worth 13 or 26 points!

The game starts with a coin toss. This will determine who goes first and who gets the hammer. The hammer is called the last shot of the round. There are two rounds in each frame. Each player gets to shoot once until all 8 (4 each) of their pucks are on the table.

Traditional knock-off deck shuffleboard won’t require any type of equipment other than the deck and the pucks. Most professional players prefer putting wax on the table’s surface to reduce friction and make movements smoother.

Outdoor (ground) shuffleboard does require some equipment. The players will need a cue stick which is used to propel the pucks forward. In this variant of the game, the pucks are also called biscuits. These biscuits are 6 inches in diameter in the ground shuffleboard and 1 inch thick.

Either version of shuffleboard is originally played by two players. However, most variants can be played by teams that are taking turns to push the pucks. Ideally, you have either singles play (one against one) or team games (two against two).

In table shuffleboard, scoring is fairly simple. At the end of each session, players mark their scored pucks, write down the score, and move on to the other end of the table. For a puck to count, it must be entirely in the scoring area.

It is desirable to knock off your opponent’s pucks from the table, hence the name of the game. Not only will that give you an advantage but will also cost your opponent points. Typically, a player or team that reaches 50/51 or a hundred points wins. However, there are scoring variations in each individual game.

When your disc or biscuit doesn’t reach the penalty line (ladies line) it is automatically counted as 0 points. 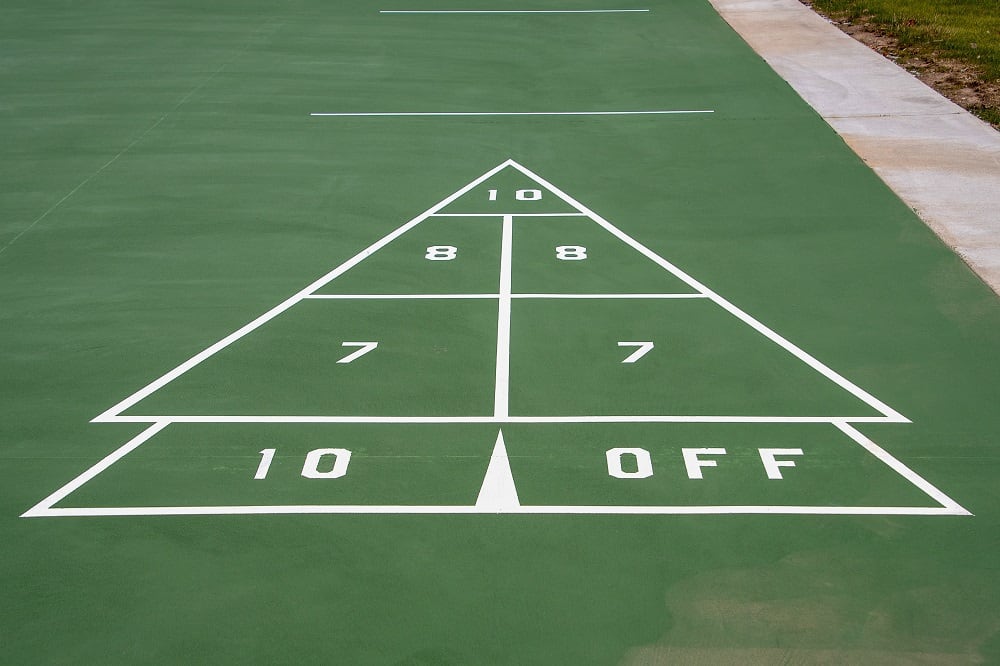 If you shake or move the table when it is not your turn, you get a 1-point deduction and your opponent gets to shoot second in the next round. Other than that, there are no penalties in table shuffleboard.

On the contrary, ground shuffleboard has plenty of penalties, such as:

Just like with any other sport, there are a few additional rules that you have to learn right from the get-go. In shuffleboard, these are:

If you want to learn the history of the game shuffleboard, click here! Now, let’s check out other formats of the game and their specific rules…

Apart from standard floor and deck shuffleboard, there are also 4 more common variations that we need to discuss as they use a different set of rules. These different formats are:

Just like in traditional table shuffleboard, the knockoff is played until either of the players wins a certain amount of points or scores the most after the two sessions are over. However, here you can knock off your opponent’s pieces which will make them lose points if the puck drops from the board. At the end of each session, the puck closer to the end of the table gets to keep its points while all the rest inside the same zone (and behind the furthest puck) aren’t counted. If you have two pucks ahead of all other-colored pucks, both of them count.

In the horse collar shuffleboard, the player (or team) who scores 51 points wins. The game is still played in two frames of two sessions each. However, each frame continues until the team scores 51 points. In order to win you also need to have the hammer, or in other words – the last shot of the session.

Scoring here is a bit trickier. In order for you or your team to start counting points, you need to have at least one puck in the three-point area. Then, anything after the foul line can be counted. Pucks that hang over the edge of the board are worth 13 points while pucks that are hanging or resting on the table’s corner are worth the whopping 26 points.

Crazy eight is extremely similar to all the traditional versions of table shuffleboard. However, the scoring system here is way more funky and engaging! The game starts by hanging you four pucks of a single color. You have to push them with the same hand. If none of them go past the foul line, you get a “hickey” and it is your opponent’s turn. If they do, however, you are handed the next 4 pucks (of the next color). Then, you need to use those next 4-pucks to push off the first 4 pucks off the table. This is generally considered a great practice for knock-off shuffleboard as it teaches you how to knock more than one puck with a single throw.

Any puck that stays in the post-foul line zone, gets to score you a point. If any of your first four pucks falls off the table, you also get no points. There are 1, 2, 3, and 4 points to be made in this shuffleboard variant. The 1, 2, and 3 points are the same as the basic knock-off shuffleboard. 4 points are awarded if your piece ends up hanging from the end of the table after the 3-point zone. The player with the most points at the end of each frame wins the frame, and potentially the game.

The official tournament shuffleboard rules are quite strict and there is a long list of them that you have to memorize if you want to compete professionally. In general, the scoring rules are fairly similar to what we’ve already discussed but there are a lot of other smaller tweaks that are designed to make the tournament feel much more official.

Target shuffleboard is one of the newest variations of the game. It is identical in terms of dimensions to the original shuffleboards. The main difference is the scoring zone. It consists of a large blue circle, followed by a smaller white circle, and a red circle in the middle. Each of those zones gives you 1, 2, 3, and 4 points depending on where the puck ends up being.

How to Play with a Handicap Scoring System

The whole purpose of having a handicap scoring system is to allow professionals and beginners to play together. It is extremely similar to having a handicap in your golfing scoring system and it uses the red and black numbers on the shuffleboard. The team or player that is better in the game will use the smaller numbers (red) while the players that are new to the game can use the bigger (black) numbers. A good example of that is a player receiving three points for their shot (red numbers) while the more inexperienced player actually gets four (black numbers) for the same shot. For the puck to be counted in the higher zone, it has to be completely in it. Otherwise, it will be counted towards the smaller score.

If you’re into the game of shuffleboard but are just starting, I highly suggest checking out out my full beginner’s guide to shuffleboard!

What is the winning score in shuffleboard?

Whenever any player reaches the score of 75, they automatically win the game. Still, all of the eight disks have of the final game have to be played and their individual scores have to be calculated before any player can be victorious.

What does 10 OFF mean in shuffleboard?

One thing that is not known by beginners is that it is perfectly legal to hit your opponent’s pucks with your shots. This means that you can even put their pucks into the penalty zone (10 OFF zone) in which case they will lose 10 points. If their puck lands on the line instead of being fully in that zone, they will only be penalized 5 points.

What is a hanger worth in the game of shuffleboard?

Whenever a puck goes slightly overboard but without falling into the alley, it is called a hanger puck. These will give you 5 points.

What is it called when you play shuffleboard on the ground?

What is this sand-like substance on shuffleboards?

Shuffleboard sand is another name for the wax used on the shuffleboard decks. It is also called sawdust, salt, cheese, powder, and more. It is there to serve a single purpose – help the pucks slide better by reducing the friction between them and the table.

Playing shuffleboard is one of the most fun activities a family or couple can do in their free time. Although the game is relatively simple, there are quite a lot of shuffleboard rules that you have to learn in order to learn how to score and play properly. While there are certain variations between floor and deck shuffleboard, the rules generally remain the same and follow the same principles.