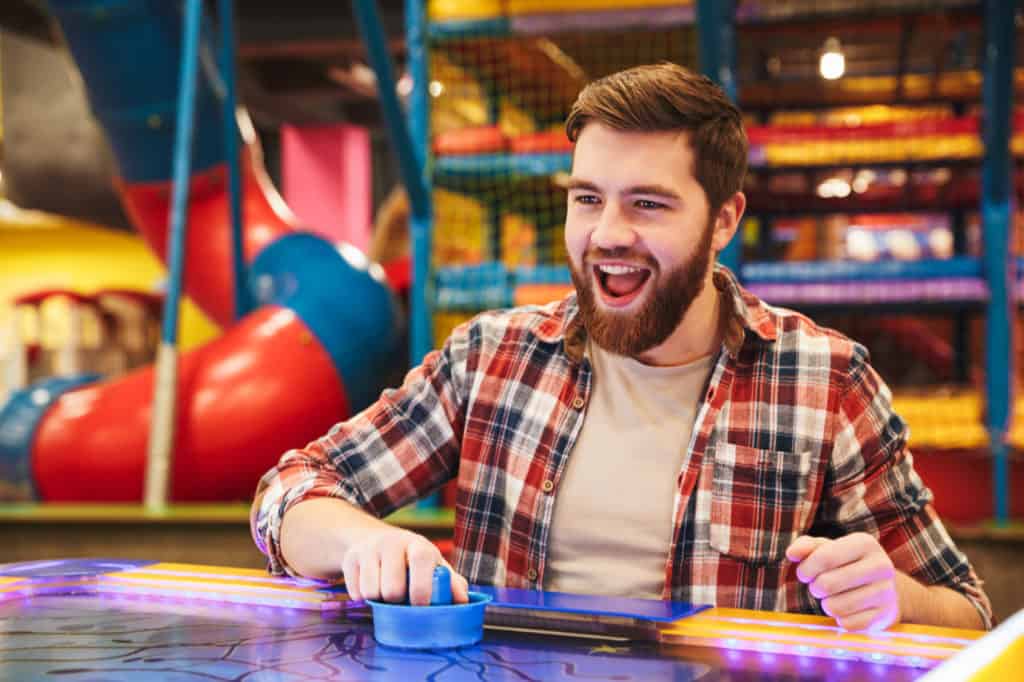 Air hockey is considered by many to be the best arcade style game ever invented. This is a very competitive game that takes skill, speed, and patience. You have to be fast, take the offensive, and have a killer defensive strategy. Our air hockey tips will help you score on your opponent using tactics that have been proven to easily allow players to dominate a match. Use these tips and strategies to show off your best air hockey table skills and help you consistently win both friendly and competitive matches.

Key Takeaway: Use the right defensive stance to protect your goal, practice trick shots before you attempt to use them in a match, especially if you’re playing against a more skilled opponent, and keep an eye out for rebounds in order to prevent scoring on yourself. These are many common mistakes new players make, but with a little practice, and with the right type of offensive strategies you’ll be able to easily dominate any match.

In order to reach a higher top puck speed, you first need to learn how to strike the puck. You want to be more of an aggressive player when it comes to making contact with the puck, driving the striker straight into the puck in the direction you want. Some newbies think that a correct bank shot is executed by hitting the puck using a sideways swiping movement. A skilled air hockey player knows you must hit the puck from behind, then strike it forward in the direction you want it to go. Doing so will ensure that the majority of the power from the striker transfers to the puck, sinking it into your opponent’s goal before they have time to set up and counter the oncoming attack.

Careful with the Rebounds

If you’re hitting the puck incorrectly, then the odds are you’re going to end up dealing with ricochets off the back wall caused by your own shots. Scoring on yourself is both humiliating and frustrating. Keep a watchful eye on the puck so you can anticipate any rebounds from your shot and shut them down quickly. Make a habit of always getting back to your defensive position as soon as you make your shot in order to prevent sinking your puck in the wrong goal.

If you’re shooting correctly, then the puck will never need to be banked off of more than a single wall before it hits the goal. For offense we don’t recommend the double bank because every time the puck slams into a wall it tends to slow it down, causing it to take longer to reach your opponent’s goal, giving them more time to set up the correct defensive stance. Remember, a bank shot must be fast, crisp, and should only hit one wall.

Want to learn the basic air hockey rules first? Check out our article on the topic!

When we say to take a defensive stance we don’t mean leaning over with most of your torso covering your side of the table. Most players, even skilled air hockey players use this position and it’s actually a huge mistake that will cost you later on in the game. If you lean over the table you won’t be able to shut down under banks because this position makes it difficult to move backward. When you lean over the table you also tend to have a snag mentality. When it comes to defense, blocking a shot should take precedence over snagging a missed shot. While snatching up a missed shot is important, it’s nowhere near as important as blocking a shot. When you have the proper defensive mechanics, blocking a shot is easy.

The proper defensive stance involves keeping the left leg back, with the right leg placed in a forward position with the knee slightly bent. The knee should lightly rest on the table with most of your weight balanced on the balls of your feet. Instead of leaning most of your torso over your side of the table it should be placed at a ninety-degree angle to the floor. Keep one of your hands resting on the edge of the railing.

Doing an overly complicated drift or shot is a red flag that a player doesn’t know much about offense. When you practice, focus on the major shots used by air hockey pros: unders and overs, cross cut shots, and bank shots. You may also need to learn how to execute these important shots from right and left of center using multiple releases.

Learn How to Adjust Your Defense 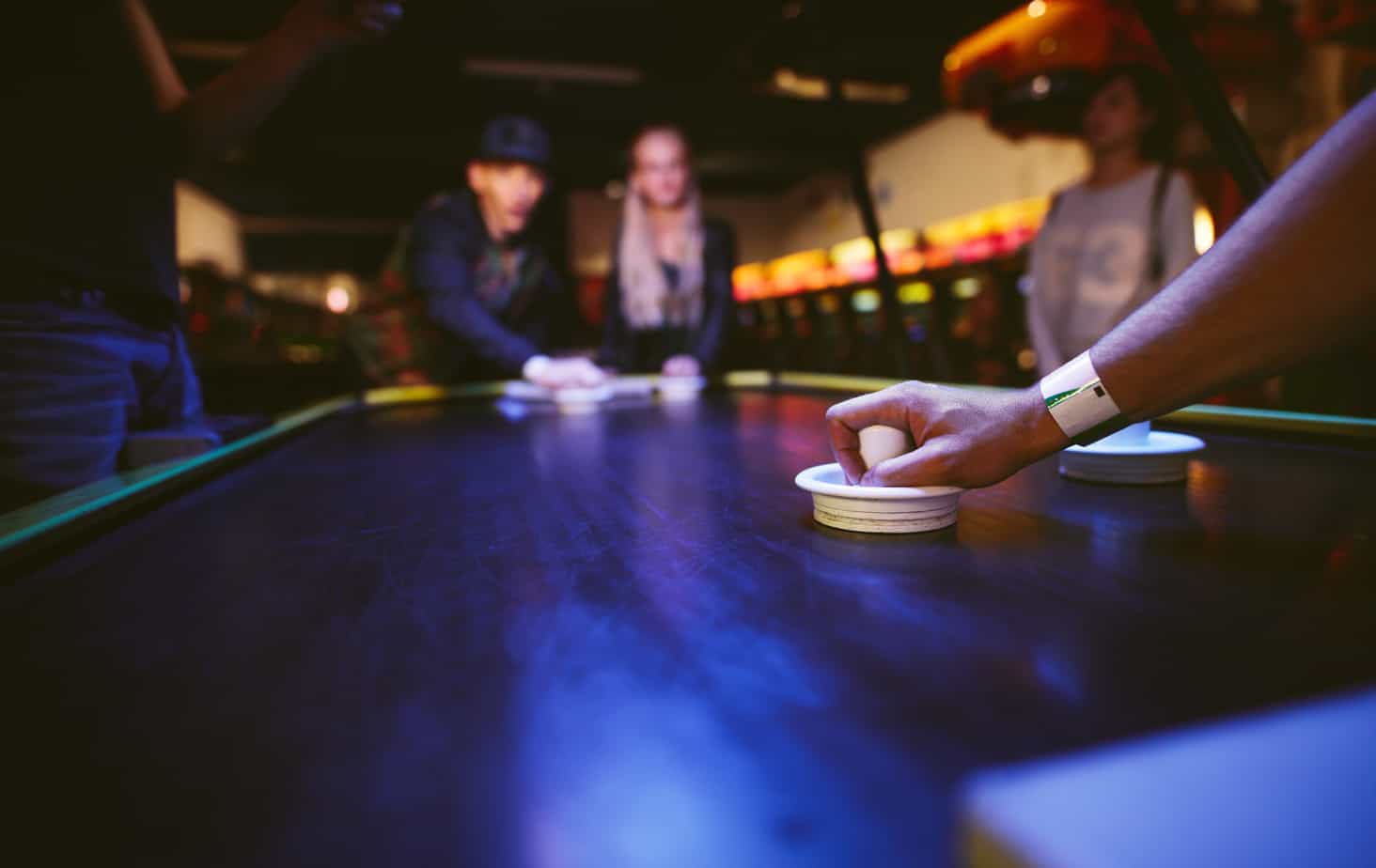 In a fast-paced game, you have to learn how to adjust your defensive stance rapidly. This involves paying close attention to how your opponent sets up their shot. This will allow you to anticipate where the puck will go so you can move your striker to the proper place it needs to be in order to block the oncoming puck.

Trick shots can give you an edge in any match. Even if you’re playing against an opponent you know has more experience than you, if you use a trick shot correctly, you can easily score on them time and time again. But these shots can be difficult to learn. Setting them up has to be done in a manner that prevents you from tipping off your opponent, preventing them from having time to adjust their defensive stance in order to block the puck. To learn more about the best trick shots that can help you sink pucks at lightning speed, click here to read our article on air hockey tricks.

If you have an air hockey table at home you can practice more regularly, at your own pace, work on perfecting your defense and trick shot skills, and generally learn the ins and out of air hockey and what not to do when you’re up against a skilled opponent. But not all of us have the luxury of having a full-sized arcade style air hockey table in our home. Fitting in a compact model can be difficult if you live in an apartment or house that’s tight on space. Models such as the Tabletop Air Hockey Table by Rally and Roar may not offer the same type of arcade air hockey experience you prefer, but it can help you to focus on bank shots and other trick shots that will help you score big during your next game. These tabletop models are lightweight and highly portable, so you can take them with you when you travel and they are incredibly easy to store.

For more information on the leading air hockey tables, click here to read our buyer’s guide.

Controlling the Puck Is Everything

Improving your puck control can mean many things from learning how to catch the puck to learning how to expertly maneuver it. The biggest mistake beginners make is catching the puck and then wildly returning it based on where the puck is at when caught and hitting the puck immediately when it crosses the centerline instead of catching it and setting up a good shot that can actually land it in the opposition’s goal. Typically, you should first focus on catching the puck, then you should gain control by taking the puck to a specific location before you execute a shot.

When it comes to offense, a player will often advance too quickly. But most skilled players caution against this and emphasize the importance of mastering each step of the game before rushing to the next. If you don’t, you’ll end up with major holes in your game which will prevent you from exploiting any defensive errors your opponent may have. When you first focus on perfecting each of the basic shots and trick shots, what the set up for each of these moves is like, where the puck typically lands when these shots are used, you’ll be able to easily identify what your opponent is up to. The ability to anticipate your opponent’s moves is essential if you want to continue to score on them and be able to set up your striker in the correct position in order to prevent them from scoring on you.

If you don’t have much time to practice your air hockey skills, it can be problematic if you have high hopes of finally climbing out of your losing streak. If you’re only able to practice once a week, make sure you make that practice session count. Play against opponents of all skill levels. If you get easily scored on, ask your opponent how they set up their shot and the mechanics behind it. Learn from your mistakes, pay attention to the opposition and what shots they use, their defensive techniques, and you’ll be able to at least score on another player. It can take time before you’re good enough to win a match, but along the way, you can easily pick up some great tips on how to improve your game. Using our air hockey tips can help you win, but it’s up to you to put in the practice time and focus on any areas that you’re weak in, in order to grow as a player. 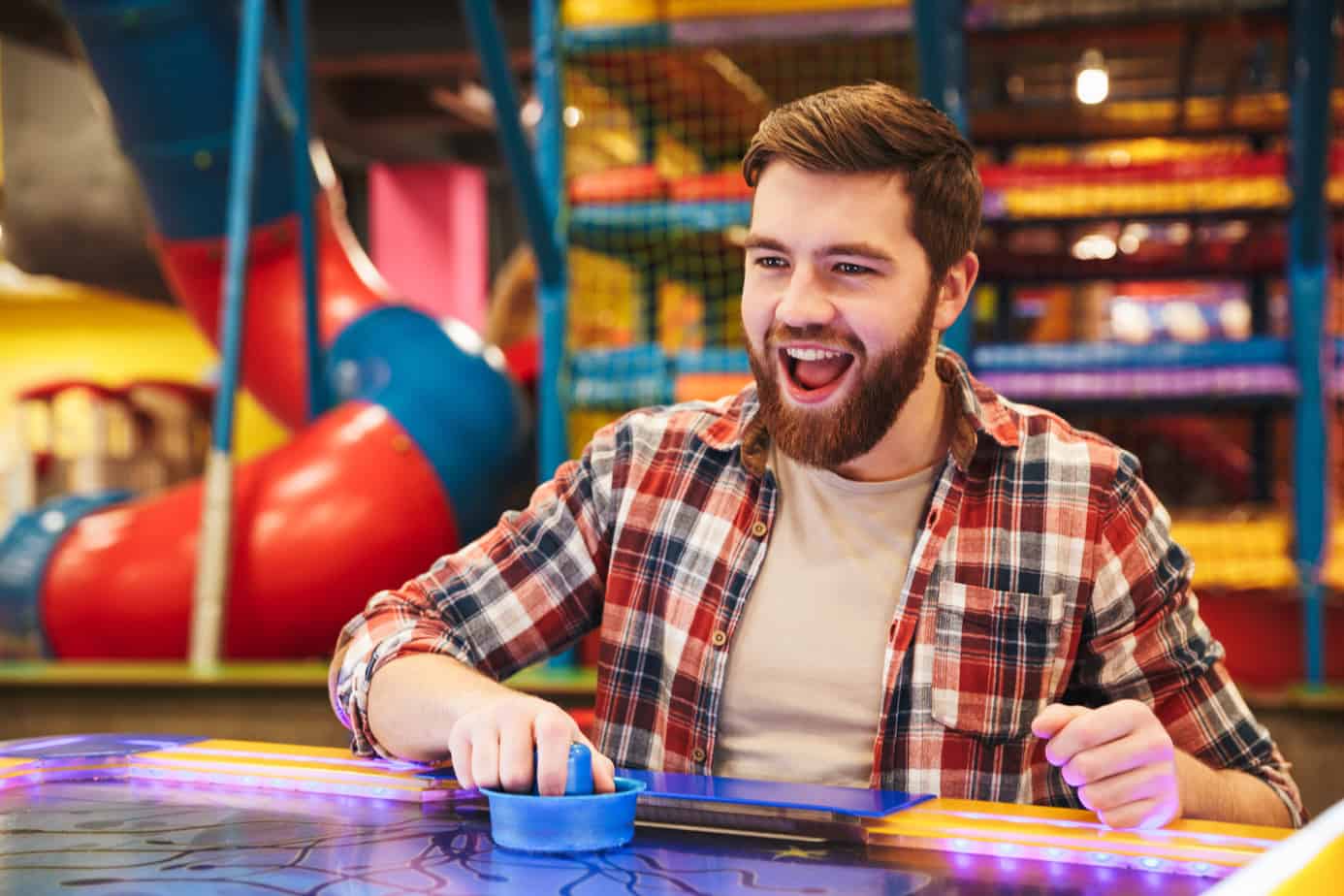 Article Name
How To Finally Win In Air Hockey - Tips And Explanations
Description
Check out our tips for the right offensive stance, how to take your defense up a notch, and what changes you should make immediately in order to score.
Author
Air Hockey Geek.com