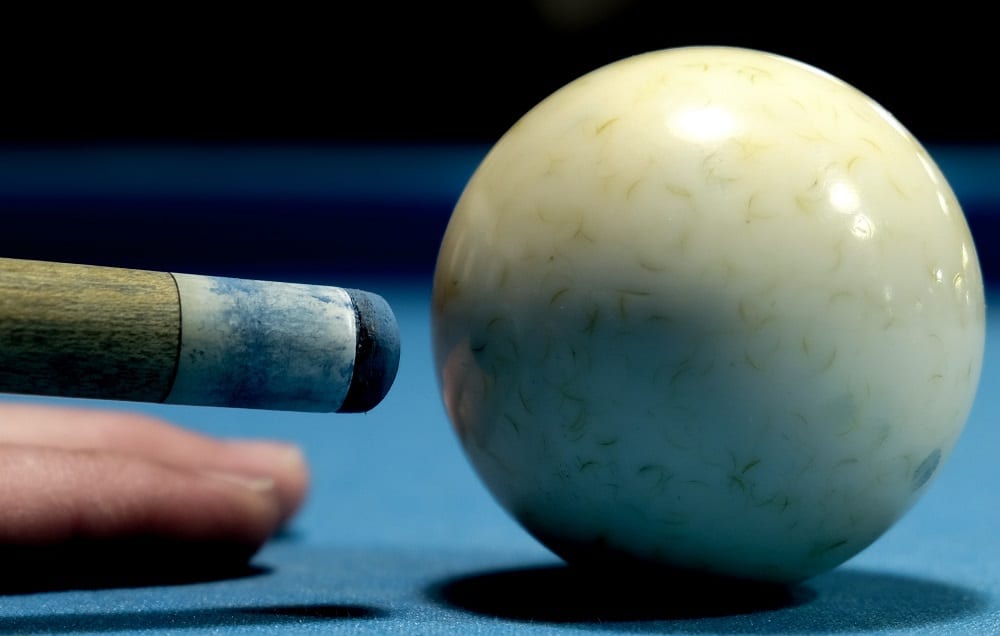 As a beginner, there’s so much to learn about the game of pool, from the way you hold the cue, to how to properly maintain your new pool table. Adding some spin to the cue ball is one of the first advanced techniques you should focus on mastering, and one that can go a long way toward improving your performance.

Learning how to apply spin to the cue ball correctly can require plenty of patience in order to perfect this type of technique. However, it can add a lot more to your game and can make your playing style more versatile.

Many beginners may not know the benefits of applying spin to the cue ball, however, seasoned players know that adding some spin will give you more control over the ball once it’s struck the object ball. This will allow you to control the final position. Adding spin can also help you get out of sticky situations if you’re snookered and unable to strike the object ball correctly. When you apply some spin off the cushion, it allows you to hit the object ball when straight shots aren’t possible.

Why You Need to Incorporate Spin

Before I go over the steps you need to take to incorporate some spin on the cue ball, let’s first take a look at how it helps and the different types of spin shots you can choose from.

There are some basic spin shots that you can utilize to improve your score, such as side, bottom, and top. When you’re looking at the cue ball, imagine there’s a clock face on one side of the ball. No type of spin you use will involve striking the cue ball directly in the center of the face. If you try hitting the ball at 12:00 o’clock above the center spot it will give the ball some top spin. When you hit the ball at 6:00 o’clock you’ll give the ball some bottom spin. When you hit the ball between these two positions, you’ll have more variation.

Top spin can occur when you apply the cue tip right above the center spot of the ball. A higher strike means more top spin. Top spin is often referred to as follow. This is due to the fact that the ball will follow through after it’s hit the object ball. This is because you’re applying more forward spin than you would with a straight shot. This causes the cue ball to travel further along the cloth after a shot, instead of slowing down right after.

When you apply top spin, it can also impact the angle that the cue ball takes once it has struck a cushion or hit the object ball. This will usually widen the angle of departure. Typically, with a top spin shot you can see that the cue ball appears to stop right before starting to move forward again. This shot comes in handy for those times when the cue ball rests behind a ball that can prevent you from making a clear shot.

Bottom spin will occur when the cue ball has been struck below the center point. The lower you hit the ball; the more bottom spin will be applied. Some pros refer to this shot as a draw or screw shot since you’re drawing the ball away from the natural settling point on the cloth after a shot has been played. When struct correctly, the cue ball can also create a stun shot, causing the ball to stop immediately after it has struck the object ball. When the cue ball strikes the cushion or object ball the complete opposite to top spin will occur, in regard to the angle of departure. It will slightly reduce this angle if played correctly.

Players rely on side spin to affect the angle of departure from the object ball by the cue ball, after a shot has been played. Also known as English, this shot is created by striking the cue ball to the right or left of the center spot, depending on which spin the player wants to apply. This is often used for positional shots. However, unless you master this spin and play the shot perfectly, it can cause the cue ball to finish in an unexpected spot or it may lead to potting errors. 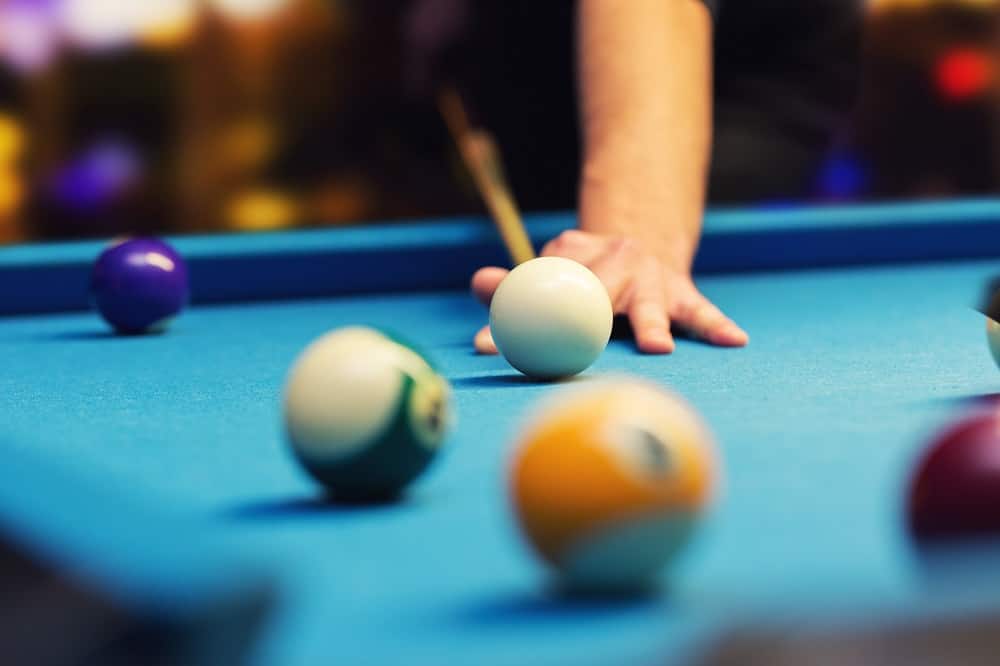 The shots discussed above are the three basic shots that players of all skill levels often rely on. There are variations of these shots that can be unintentional at times, if the cue tip hasn’t struck true on the ball. Additionally, spins can be merged for different types of effects on a shot, such as if you strike the ball midway between side center and above center. This will give you a combination of both side and top spin.

To perfect these shots practice is really important. With more match play and experience under your belt, you’ll soon begin to recognize which types of spin shots you should utilize to beat your opponent. Using the wrong spin can make your next shot more difficult, especially if the cue ball doesn’t rest where you need it to.

Keep in mind that different tables can also have an impact on how spin performs on the cue ball since different cloths can produce more or less spin, dependent on the friction and the cloth itself. Additionally, if you don’t know how to level a pool table, your shots can also be severely impacted. The hardness or quality of the cushions can also affect any shot that’s played. It’s always recommended to get in some practice shots on a new table that you’re playing on so you’re able to counteract any effects the table has on the ball.

As I mentioned above there are a lot of variations to the three basic spins that you can add to your game. As you know by now, the way a cue ball spins can determine your control over a ball and ensure you always get to pocket.

When it comes to spinning the cue ball, there are many different techniques involved. The variations of the three basic spins include:

When you’re hitting a straight on shot, you’ll use the force follow spin. With this shot, once the cue ball is hit it takes just a split second to start off and then hit anything in its path. Even after bounce back or hitting the rails, the cue ball can hit the other balls a second time.

When the cue ball is sliding and has some side spin on it, when the ball comes into contact with the object ball dead on it comes to a complete stop. However, the cue ball will continue to slide till the side spin wears off.

This is a type of shot that a player will intentionally make to cause the cue ball to jump a little in the air. While this move is allowed in certain games, it isn’t allowed professionally since it can damage the cloth of the pool table.

Some pros recommend improving your pool aiming, before even attempting to add some spin to the cue. In most cases, they’re right. Once you have the basics of pool down, you can advance to more challenging techniques, such as adding some spin. If you’re confident in your performance and feel like you’ve mastered the basics, then the first type of spin you should focus on mastering is the back spin.

If you need more help with your aiming, then click here to read my article on aiming in pool. This in-depth how-to guide will help you develop your game and can significantly improve your shooting accuracy.

Adding Some Back Spin-Beginner Level

As the beginner you should focus on adding some back spin to the ball before you advance to more complicated moves. With this shot the ball will travel back to you after it has hit the object ball. For the beginner, it can be an exciting and important shot to learn and it’s one all the players rely on often.

For some of the best pool tips for beginners, click here!

Once you find yourself successfully using the back spin shot then you can begin lowering your bridge slightly to the normal bridge you often make for other shots.

If you fail to get the ball back in a straight line, this is happening because you’re imparting no back spin or less back spin on the cue ball. This usually occurs if you’re playing with a house pool cue that’s not a low deflection cue. These cues often impart side spin on the ball. If you want to improve your game faster, then you’ll want to invest in a high-end pool cue that’s a good fit.

If you’re also interested in some of the best pool balls for this year, make sure you check out my detailed guide on that topic!

The steps I’ve included here will teach you how to spin the cue ball so you can surprise your opponent and tackle harder shots. For the back spin move I discussed, you’ll need to adjust your bridge and raise it slightly to put some back spin on the cue ball faster. Doing so can also help you get the feel of the back spin shot easily and you’ll have a better understanding of how it works.