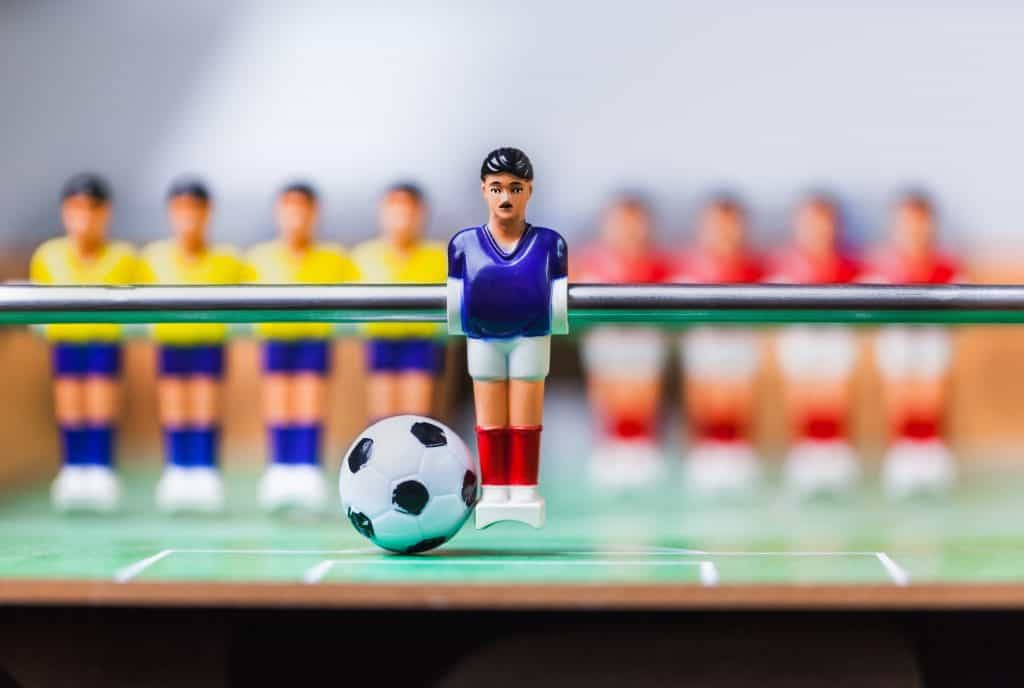 Foosball is a challenging, fun, competitive game and sport that’s commonly found at arcades, pizza parlors, bars, rec centers, and even at home. If you’re new to the game, then learning about the basic foosball rules will give you a heads up concerning what is and isn’t legal, so you can improve your performance by knowing what moves can seriously cost you.

This is a game that consists of figures mounted on rotating rods that have thick rubber handles at the end, with the players mounted along the other portion of the bar. The rules are fairly simple, but like learning about any new game or sport, becoming familiar with how the game works and how it’s played will take some time. The rules are simple enough, and some may not even come into play unless you’re playing in a tournament. You’ll find that when you play foosball in a public place, such as a bar or arcade, many opponents don’t follow the rules as closely as they should. However, knowing the rules will give you more control over the game and how it’s played, allowing you to call out other players if they try sneaking an illegal move past you in order to sink a goal.

At the beginning of a match, the ball is served through a large opening in the middle of the table. You’ll use the figures on the rotating rods to move the ball into your opponent’s goal. Goals are usually eight to ten inches wide.

The middle rod features five men. These are the midfield positions, so you’ll use these men for shooting and passing.

The last rod has three men.

You can play this game one on one or two on two. As a beginner, you’ll want to get a feel for the game slowly, so one on one is always best.

The following rules I’ll include here have been established by the United States Table Soccer Association, and are the rules that apply in every tournament. 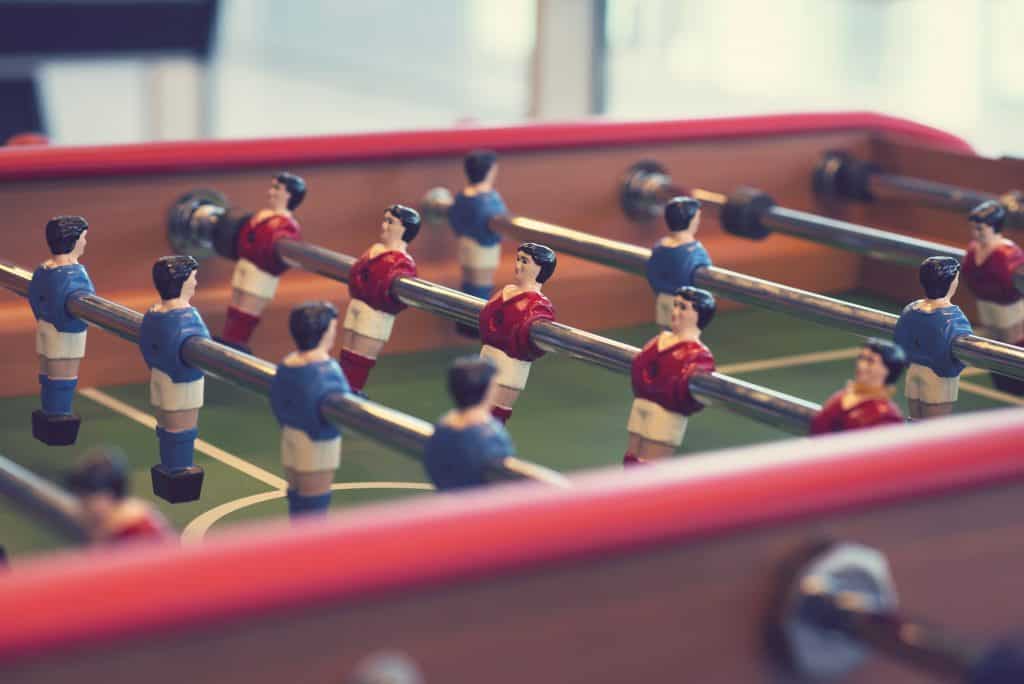 In order to determine which player will serve the first ball, coin tosses are commonly used. After the first goal is made, the scoring team is the team that will serve and begins the next round. This works to keep the game fair for both sides.

Spinning the rod is a big faux pas that most beginners make. When playing, you must use wrist strokes in order to block the opposing side’s moves or to move the ball forward. Spinning a rod more than three hundred and sixty degrees after or before a shot is an illegal move.

Jarring is defined as a type of forceful slamming of the rods against the table’s wall. This move is designed to jar the ball out of the opponent’s possession. It’s also used to distract the opponent. This move is typically considered illegal, however, some tournaments do allow it.

But if you’re playing a game against someone who doesn’t allow it, the opponent can either play the ball from the point of the infraction, continue the current playing position, or they can request a reserve.

If the ball stops rolling and it’s between a couple of your opponent’s rods, the ball should be reserved. The serve should be done by the person that made the last goal. If the ball stops moving on the defense side of the table and it’s behind the second bar, then it will totally be up to the defensive player to place it back into action. This rule is designed to prevent the players from making a dead ball move to try and reserve it.

When is a Ball Out of Play?

If the ball comes off the table or it hits the top railing, landing in the table area, it’s out of play. If you’re dealing with an out of play ball, it must be reserved by the team that made the last goal.

This rule applies to the five-bar, not any of the other rods. A player will have to pass the ball from the five rod to the third rod within a period of ten seconds, right after a serve. After the first serve in a game, the player will have fifteen seconds to make a pass from the fifth bar.

A ball can’t be completely stopped at the fifth bar and then passed to the third. It must be moving and make contact with a couple of men on the fifth bar before it can advance.

Rules Based on Table Size 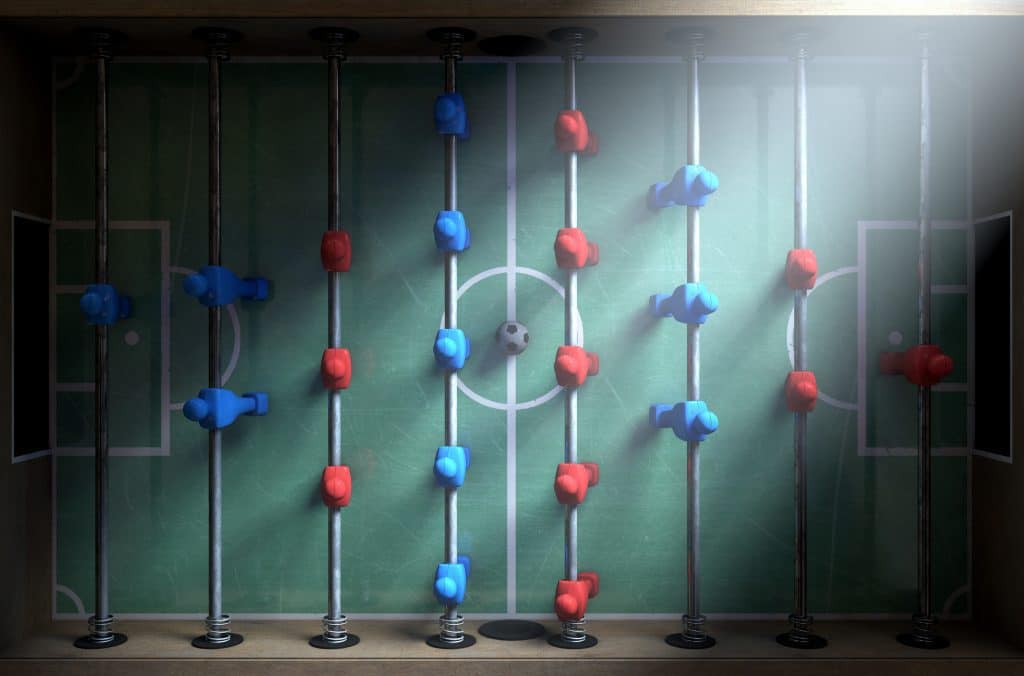 The standard dimensions of a foosball table measures in at fifty-six inches long by thirty-inches wide. While this is the standard size for these tables, there are other versions of these tables produced, especially home models, that may be slightly smaller. However, if you’re looking for a model to use for practice at home, I recommend buying a standard size model, such as the Warrior Table Soccer Pro Foosball Table.

Some tables may also come equipped with sloping corners that are designed to bring the ball into play in the event that it ends up in a corner.

To play the game comfortably, each play will need some space to move around, especially for players who want to use the correct foosball stance during a match. Ideally, there should be at least three or four feet of elbow room on each end of the table.

Aside from the basic table dimensions, there are some other factors to consider, such as an end ball return or a side ball return. Most people tend to choose models that have side ball returns, which allows the owner of the table to push it up against the wall in order to save some space, but keep in mind, doing so can hinder the player’s movements since it takes away from the elbow space on that side. To learn more about foosball table designs and how it can impact your performance, click here to read my buyer’s guide.

If you’re new to the game, then the odds are you don’t quite realize the importance of using the correct stance. But using the right stance can allow you to score and perform better since you’ll feel more relaxed. To use the proper stance, you’ll slightly angle your body diagonally. Your right arm should be able to move freely, while your left side should be kept closer to the table, allowing more movement for your right side. The offensive three and defensive two rods are much longer, which means you’ll need more room to pull them back all the way, compared to the other rods. Feeling relaxed and comfortable is important since it will allow you to move freely.

Basic foosball matches end after five points or goals are scored. The player that makes five goals is the winner. A match can be played where the best two out of three or three out of five will win the match.

For a common game of foosball, it’ll be a basic game of one on one, which each player controlling four rods on each side. For doubles, one player one each team will control the leftmost rods, while the other player focuses on the offensive three rod and five rod. For a goalie war game, which is one on one, one player will control the leftmost defense rods only when the middle four rods are not in play.

Trick shots are allowed in foosball, just as long as you stick to the rules and avoid using moves such as jarring or spinning to try and sink the ball. Of course, learning how to make trick shots and complicated passes will be a skill that you’ll develop over time, but you can plan your strategy and new moves around the rules of the game, in order to prevent being called out for an illegal shot. To learn more, stop by and read my article on foosball tips and tricks.

Practice makes perfect, so it makes sense that learning the ropes and remembering all of the foosball rules will take some time. While you’re learning, sticking to the rules of the game will be important, since it can help to prevent you from picking up any bad habits. It will also allow you to call out the opponent if they try to use any illegal shots on you since you’re new. Foosball is a fun and exciting new game to learn, but just like any other sport, there are many rules that you need to adhere to. But with a little practice and some patience, you’ll get the rules down, learn what moves to avoid, what is and isn’t acceptable during a match, and how you can get an edge over your opponent.