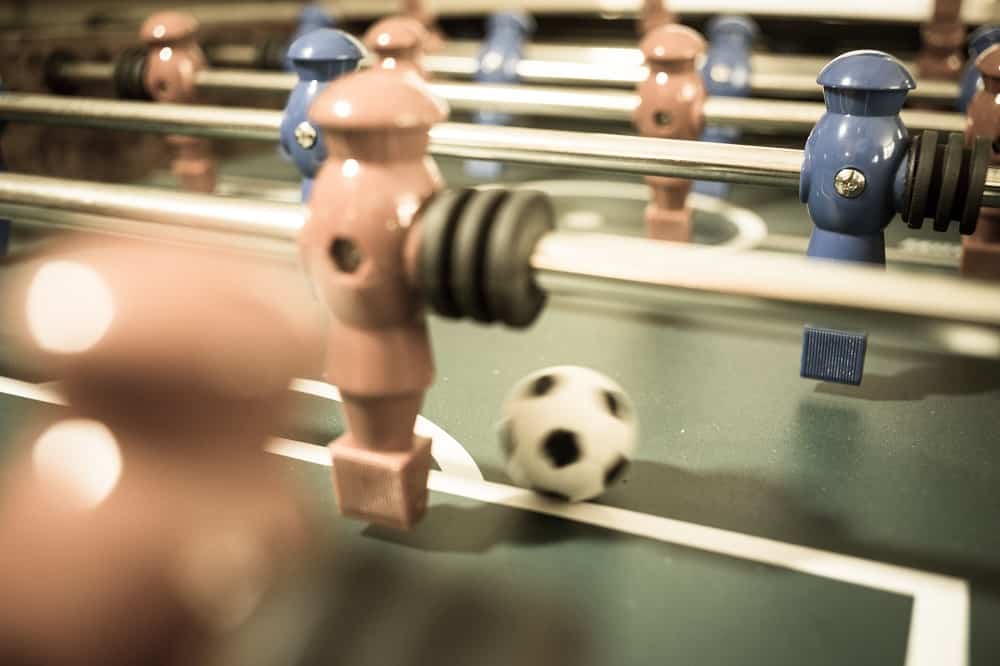 Improving your foosball ball control is all about learning how to pin the ball, catch it, and trap it. Learning how to do so is key to improving your game and boosting your performance, ability to pass, and land a goal. Of course, learning these techniques will require patience, practice, and dedication, in order to see a significant improvement in your performance and beat highly skilled opponents.

Practicing ball control is essential since it will give you the advantage over your opponent right from the start of a match. So,  if you want to dominate the game, you need to learn how to control the ball by pinning it, catching it, and blocking the shots of your opponent. Techniques designed to help you pin the ball can improve your overall control, offense, and defense. When you pin the ball, you’re keeping it in your possession. The way to develop your technique for this method is by first understanding the tiling of players and how to occupy the right positions. You can easily practice pinning with another player or alone.

Even if you know how to serve in foosball and you have a powerful shot that can easily allow your ball to pass through the gaps, if you’re not able to block the ball and pin it down, you’re not going to score often.

When you know how to block and pin it will bring the ball right back into your possession and once you have the ball in your control, you can do anything.

This game is all about control and the gameplay itself is very fast. When you develop a pinning technique, you’ll be able to take charge of the game instead of being at the mercy of a highly-skilled player.

Every player has their go-to shot placement. Even top players will favor one or two shots that they will use often to pass or score. When you learn how to pin the ball, you can place it exactly where you want it so you can pass and score easily. If you don’t know how to pin and trap the ball, you’ll have to wait for the ball to move into a particular position, which won’t happen often. Pinning and trapping will give you more control on both sides of the rod.

Shutting Your Opponent Down

If the opposition has got you pinned down, without blocking and pinning skills, you won’t be able to get off a shot, so you’re basically a sitting duck waiting for the opponent to make a goal and give you another opportunity at scoring. Learning ball control is everything and allows you to set the pace of a match. 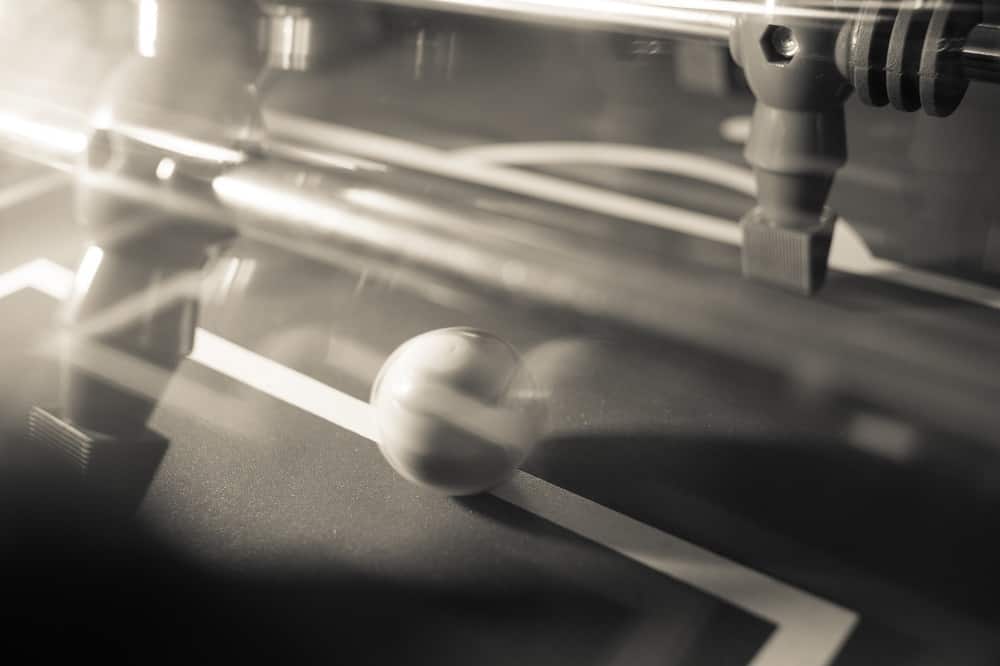 A player’s defense will depend on pinning and catching the ball. If you’re regularly able to block the ball but you find that you often end up handing the ball over to the other player, you’re not doing it correctly. In order to improve your defense, you’ll need to learn how to pin and catch.

Keep Your Opponent on Their Toes

This game is both mental and physical. You know your opposition has a plan. By catching and pinning the ball and keeping it on the rod, you can buy yourself more time and determine what type of shot you should take in order to score. It can also clue you into what type of strategy your opponent is using.

Pinning is an integral part of both defense and offense, allowing you to play the game to your strengths. By creating a strong pinning technique, you’ll also cause your opponent to change their playing strategy.

How to Gain Control

Each time an opponent’s shot is intercepted or a pass is received, pinning the ball will mean that the ball is in possession, but in order to pin it, the player must be tilted at a forward angle, with the legs lifted backward. The ball will then hit the slope of the legs, then stop. Once you have the ball pinned under the legs, it’s then moved around back into action. Pinning will prevent the ball from immediately going to the opponent’s area.

Use the Perfect Angle

The right angle for pinning is one that causes the ball to wedge under the legs. The ball will roll to the bar and immediately stop. This is the best way to catch the ball and prevent it from deflecting off your players.

You can shoot for either back or front pinning, however, it makes more sense to catch the ball in the backward position and it will also give you a little extra time. However, using the front angle can deflect the ball faster.

When you front tilt the legs if gives you the advantage of minimizing the gap. So the angle you use will depend on your skill level. Trying either of these methods will be much better than simply keeping your players in a vertical position.

The key here will be to take the right stance and get the right grip, flicking your wrist as you move the rod and anticipate the wall pass or lane pass. 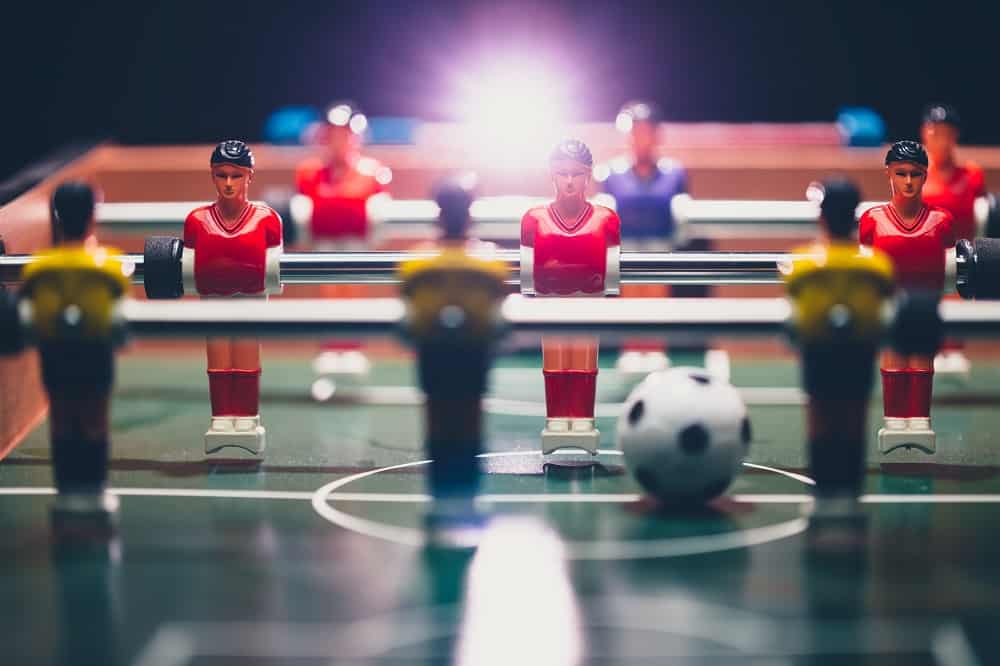 Once you’ve caught the ball, you must control it by pinning it. You need to move the ball across by passing it from one player to the next or you can move the rod in order to pin it. To confirm pinning control you can tap on the ball and move it back and forth a couple of times. Total pin control will ensure that you have a handle on your moves and it will also give you the ability to fake a move so you can easily move the ball in either direction before you pass. If you’re taking the shot from the five bar or the three bar, then pinning will also help a lot. Without total control, shooting or passing the ball will be too risky.

How to Grip the Rod for Pinning and Catching

You have to use the right grip in order to pin and catch the ball. Your grip must be secure and not slippery. An open-handed grip tends to work the best since you can turn the rod easily at the right time.

Playing this game requires excellent hand-eye coordination, but most beginners tend to stand in a difficult position that doesn’t give them the freedom of movement that they need. There’s really no standard stance since different people will favor one over the other based on comfort. The point here is to take a stance that doesn’t hinder your movements.

Pinning can be difficult for players of all skill levels. The speed that your opponent plays with will be the biggest challenge when you’re trying to catch and pin. In order to get around this, make sure that the angle of the tilt isn’t too high. A high speed ball can easily pass under the legs of your players, so remember to avoid keeping the players positioned vertically.

As a beginner, you may focus too much on passing and shooting. Instead, it’s more important to understand pinning and catching and how it can have more of an impact on your performance and your ability to score. Passing and shooting will only be effective if you know how to pin perfectly.

Instead of devoting too much practice time to passing and shooting, spend more time practicing pinning and blocking. This will increase your chances in several ways and will allow you to learn how to control the ball. Start off each practice session by practicing your pinning a few times, and if possible, play against someone.

Use the best foosball table, one that’s regulation size, when you practice. This will allow you to train on the same types of tables that you’ll commonly find in tournaments.

Start off a practice session using some straight shots. Begin with the goalie and defense and pass straight from one player, catching with another. Focus more on catching cleanly instead of speed. The speed can gradually be increased as you become more confident with your catching abilities. Next, you’ll want to keep a rod still and move another in order to catch the ball. The ball should be hit straight, just like before, which will help you practice better ball control.

Once you’ve perfected your ability to catch the ball, you can focus on pinning. Begin by placing the ball behind the rod with the legs on the top. Next, tap the ball a few times and move it in both directions. Try passing the ball to another rod, then repeat this process. The goal is to practice these moves as much as possible in different directions in the lanes and along the walls.

You should practice pinning across two rods and on the same rod. It should begin at a lower speed and gradually increase. When it comes to pinning and catching brush shots, consider the spin. If your grip isn’t firm, then the ball will be able to slip through and go straight to your opponent’s rod. A spinning ball can be caught right at the base of the legs.

Obviously, a lot of practice will need to go into pinning the ball, however, once you’ve perfected it, it will give you a big advantage over your opponent. While you can practice these techniques alone, it’s much better to have someone to practice with and can make it easier for you to learn how to compensate for the opponent’s unpredictability. Passes and shots in a game will always be unpredictable, so practicing against a friend can leave you feeling more prepared and confident in your catching, trapping, and pinning skills.

Many players will use a pin shot in order to make a goal. This is a very effective shot that causes the ball to reach the striker rod where it’s pinned by the three rod and the central rod, then shot straight. When there’s a strong defense, the straight pin shot won’t work well. In cases such as these, a player can pin the ball and keep rocking and passing it from one edge of the goal until a gap has been found.

Speed will not always be very important, instead, you’ll want to focus more on ball placement. Pinning will make each position a possible place to strike.

There are a couple of pin shots to choose from: back and front. You can also try to use a combination of these moves in order to confuse your opponent. The only issue here is that you may end up accidentally making a complete circle, which, according to foosball rules, is considered a foul. If you make a foul, you have to hand the ball over to your opponent.

Learning perfect foosball ball control is essential if you want to grow as a player. While learning how to pass the ball will be important, it’s better to begin every practice session focusing on both blocking and pinning moves. The ability to block and pin will allow you to easily prevent your opponent from scoring on you, while also giving you total control over the ball and the match. Dedicate at least fifteen minutes per practice session to focusing on both pinning and blocking and you’ll notice that your performance and ability to score on your opponent improves dramatically in just a matter of weeks.