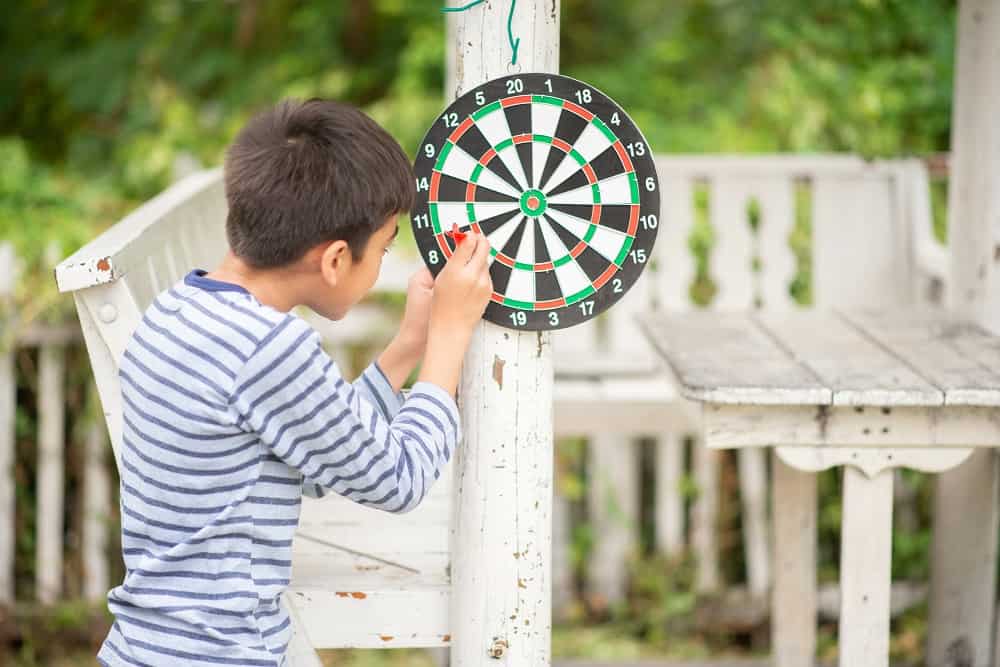 Deciding how to keep score in darts will depend on the type of game you’re playing. However, there are some standard rules that you must follow in every game. Here, I’ll go over the basics of darts scoring so you can get started quickly with some of the most popular games, such as cricket and 501. Fortunately, keeping track of dart scores is a pretty straightforward process, however, if you’re playing with more than one other player, then it can quickly become confusing, especially if you’re playing in a loud environment such as your local pub. Here, you’ll learn how you can easily keep track of the score, based on the game and the number of players.

Before you get started playing, you’ll need to use a scoreboard. If you’re playing on an electronic dartboard then the scoreboard will be attached to the board and can easily be programmed to record scores automatically. If you’re playing on a traditional bristle board, then you can use a dry-erase board or chalkboard. Some of the best dart board cabinets even come with attached scoreboards. A scoreboard should have a printed grid for 01 and cricket games.

You can easily create a grid yourself on a blank board, if the scoring grid isn’t pre-printed. According to dart rules, the scoreboard should be mounted within four feet from the board, at a forty-five-degree angle from the dartboard. The board should be clearly visible at the throwing line. Along with the scoreboard, you’ll also need to appoint someone to keep track of the score.

In a tournament or a serious league game, you’d have an actual chalker designated as scorekeeper.

When you’re doing basic dart drills or tossing for fun, then you’ll be responsible for tracking your own score. If you’re new to darts, then use the guidelines in this article to show you how to accurately track your score. 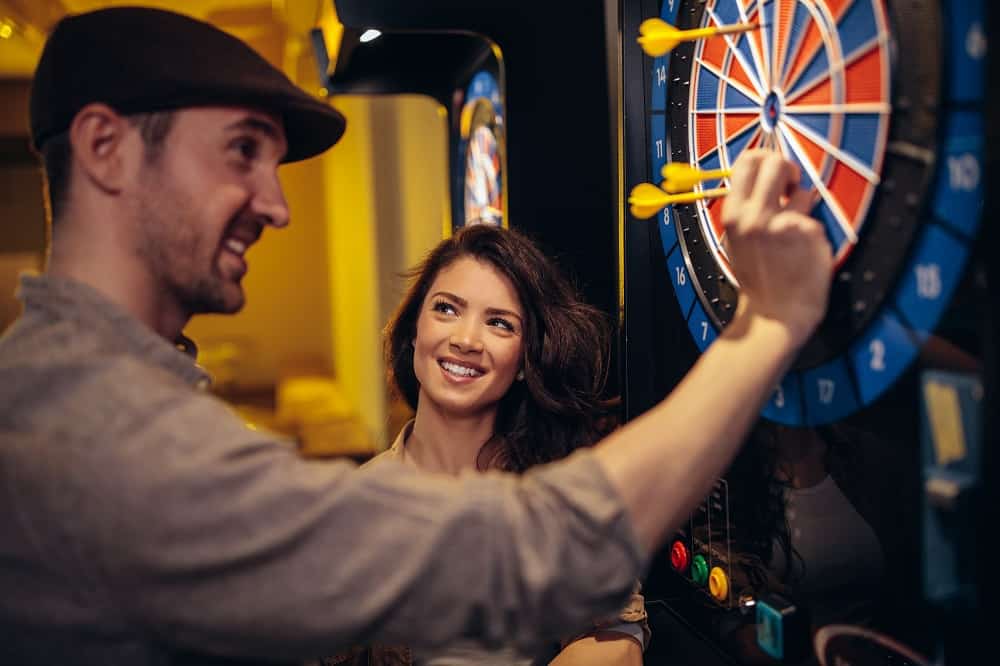 If you’re playing in a sanctioned tournament or in a league, then there must be someone acting as the chalker in order to keep track of the score. However, most people just play for fun. If you’re playing for fun, make sure that you leave the darts in the board until you have the chance to record your score.

Darts must stay in the dartboard for a period of at least five seconds after the final dart has been thrown in order to count. If the dart falls on the floor or lands outside of the dartboard, then no points will be scored. In either case, it good to have a quality dart backboard to protect the wall as well as a dart mat to keep your floors from being damaged.

For any of the 01 games, the scorekeeper will need to mark the scores that are made in a turn using the outer columns of the scoreboard. The total score should be kept in the two middle columns.

If you toss a dart and it ends up landing between the connecting wires on the dartboard, the score is going to be the higher of the two wedges.

Mistakes when you’re tracking the score can happen, especially if you’re distracted or there are many people throwing a round with you. If you’re not paying attention, it’s even easy to forget to stay behind the toe-line when throwing darts.

When it comes to accurate dart scoring, you’ll need to use basic arithmetic skills. If you make a mistake keeping track, you’ll need to correct that mistake before the next turn. When you’re playing doubles, then the mistake must be fixed before your teammate’s turn. If the mistake remains when your teammate or you start the next turn, the score must stand. This will apply to most dart games.

Scoring can be tricky, depending on the type of game you’re playing or even the environment. But by following the tips I’ve included below, you should be able to easily keep track of the score using some basic math.

Depending on the type of dart game you’re playing, you’ll begin with the total number on top. So, if you’re playing a game of 501, you’ll begin by writing 501 at the top of the board. You’ll then record the total score for every turn in the outer column on the scoreboard, then subtract that number from the score, updating the remaining score and placing the number in the inner column. The remaining score must be updated with every turn.

To begin a game of 301, you’ll first need to hit a double of any number on the bristle dartboard. You are not able to subtract from 301 until you’ve achieved this.

For 501, you’ll need to land a single of any number before you’re able to begin subtracting from the total score.

In any type of 01 game, the game will end as soon as you or an opponent will hit the double that’s required to reach zero. Any subsequent darts don’t count.

A bust will occur when a player scores more points than needed in order to reach zero. If that occurs, then the player will just have to go back to their previous points total. If you end with one point left, this is also the case, since you cannot halve the number.

For the game of crickets, a player is only scored based on the numbers 15-20, and the outer and inner bull. A player will need to score three of a given number in order to close that number. This can be accomplished with three singles, a double and a single, or a triple. Once a number is closed, a player can score points on that number until their opponent closes the same. The double and triple counts as two or three times the numerical value of that particular number when tracking the score. A player will add the scores to the previous score using the outer column on the board.

In order to close the bull, the outer bull will count as an inner and single bull counts as a double. For scoring, the numerical value for scoring is twenty-five. The bullseye is worth fifty points.

In cricket, the numbers can be scored on and closed in any order. A player can also tweak this rule by agreeing with their opponent, before the game. Like every dart game, a player will need to verify and record their scores before removing the dart from the board. For this game, you’ll win once you’ve closed all of the numbers and have the highest score. If both sides have no points or are tied in points, then the winner will be the player that’s the first to close all of the numbers. If one player closes the numbers first, but they’re still behind in points, then that player must continue to play until they’ve exceeded their opponent’s points in order to win. 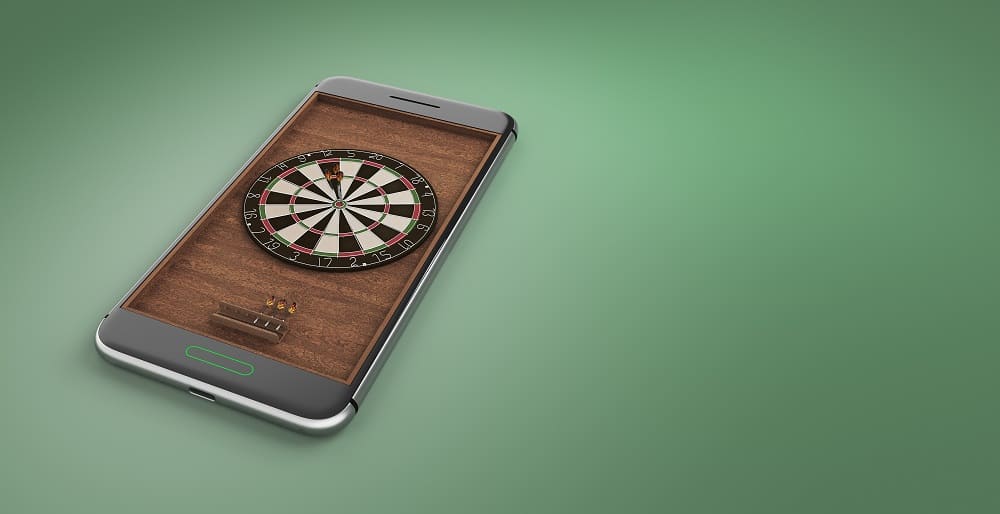 These apps account for every level of player, so you can choose how many sets each game is going to be. These apps will make the scoring process much easier and can come with options for players to play against the computer, which will make your solo games or practice sessions more challenging.

Hopefully, after reading this guide, you have a better understanding of darts scoring and the type of darts scoring method that will work the best for you. Keeping track of the score is simply enough for most players, but it can become overwhelming or confusing if you’re playing with more than one other player. If you find that you’re struggling to keep track of the score, then purchasing an electronic scoreboard or using an app are both great options.