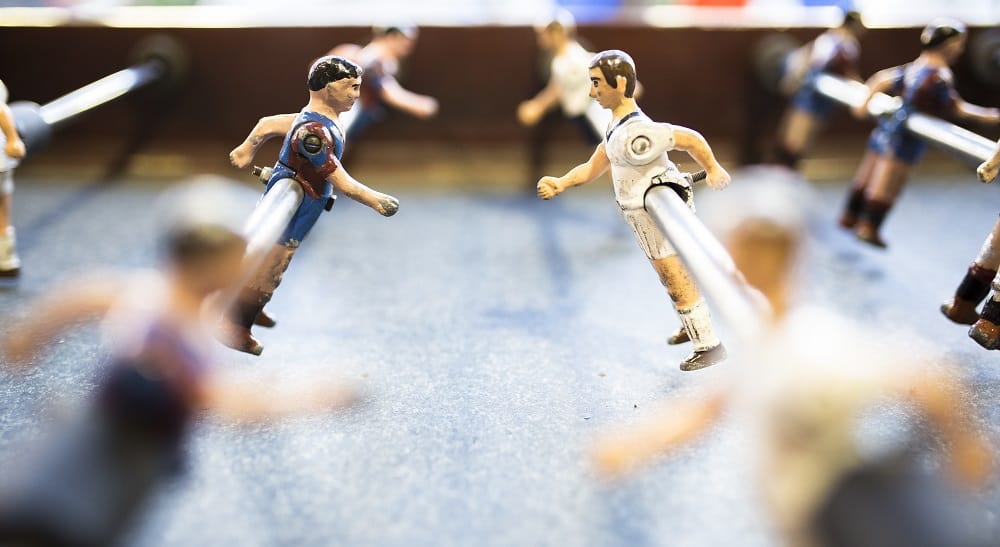 If you’re a big foosball fan and you have your own foosball table, then you probably feel pretty confident that you know everything about the game, how it’s played, and the best strategies to use, but did you know there’s a difference between American versus European foosball? There are, in fact, major differences between each type of table, which I’ll discuss here, in-depth, so you can learn about the pros and cons for both European and American foosball and maybe even try your hand at playing on a European foosball table.

To the beginner, both American and European foosball tables may look the same, however, they’re definitely not. If you have experience playing on an American table, once you try out a European model, you’ll feel the difference right away.

Below, I’ll go over these major differences and what you can expect when you play a little European foosball.

When you play a game of foosball on an American table, you’ll find a row of three foosball men placed directly in front of a goal. When you play on a foosball table in Europe, you’ll find that there’s only one goalie. Of course, you’ll find some American made tables that come in both three goalie and one goalie versions, so you can choose a design depending on your playing preference.

For some players who make the switch from an American table to a European one, the biggest adjustment is learning how to serve in foosball with the different bar design.

The foosball bars on European tables are significantly lighter compared to American made tables. The bars handle quite differently compared to an American table and will allow players to move the foosball man using a better degree of accuracy and shooting precision. Additionally, the tables often have a surface that’s coated with Gerflex, which provides smoother playing action that will allow players to try out more difficult shots.

On an American table, you’ll find that there are full bars that go through the table structure, which can be somewhat inconvenient, while the European tables have the popular telescopic bars. This is what allows for better control for speed shooting and tricks. However, if you keep the bars well lubricated on an American table you can also enjoy faster gameplay and improved shooting precision. To learn more, click here to read my guide on how to lubricate foosball table bars. 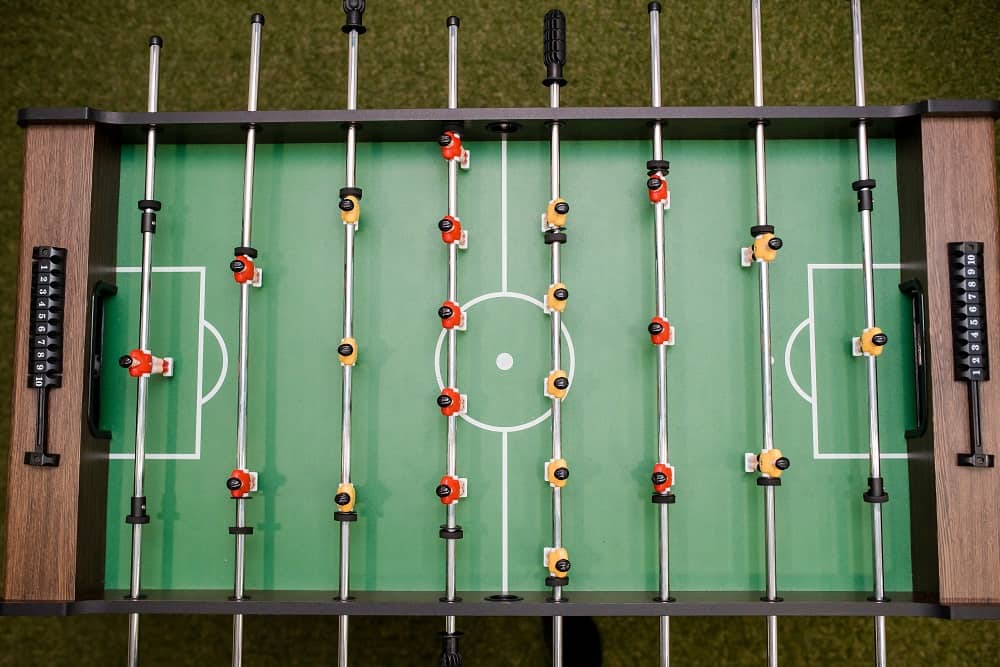 The European table’s structure is often made entirely out of metal and wood with no plastic materials used whatsoever. However, this is more of an aesthetic concern. These tables often come equipped with foosball men that have been carefully crafted and painted. The men are often outfitted in uniforms of major rival soccer teams. If you’re a huge soccer fan, then this can be a big deal. Because the European tables are usually made out of solid wood and metal, you can also anticipate the tables being significantly heavier than an American made table. For some, the increased weight can be seen as a positive thing since the heavier frame design can prevent the table from rocking or moving during a fast-paced match. However, the biggest issue with the heavier weight is difficulty transporting it but if you have a dedicated game room in your home that shouldn’t be a major issue. The lighter weight of the American made tables can make them more susceptible to rocking, wobbling, or sliding during an intense match.

Many players argue that European foosball tables can potentially offer faster game play due to the coating on the playing surface. As I mentioned above, most European made tables have a Gerflex coating. Gerflex is considered one of the best playing surface materials in the world because it’s grippy, flexible, durable, and provides better control, allowing you to do some neat shooting tricks.

Playing on a European Table

So, how does playing on an American foosball table compare to playing on a European model? Many players will be surprised to learn that there is a huge difference between each table in terms of how a player’s performance can be impacted. The European tables are designed with a more skilled player in mind, especially the pro who uses advanced tactics and shooting accuracy. The table’s lightweight rods, combined with a grippier playing surface makes it much easier to line up a shot and can go a long way towards improving a player’s shooting precision. Additionally, when you play on a European table you may be surprised by how quiet the game is.

However, many people who have played on both American and European tables argue that American tables also offer fast game play.

Pace of the Game

In an American match, the game often has a much faster pace, with less amount of time spent lining up individual shots carefully. This often results in a match that’s more intense. In most cases, American foosball games tend to finish faster than matches played in Europe.

Whichever type of table you choose, keep in mind that foosball is a huge sport both in America and Europe and both types of playing systems can be very rewarding and fun for the avid foosball player.

Rules of the Game

In general, foosball rules are the same whether you’re playing on an American or European table. Of course, the biggest problem or adjustment for most players will be learning how to play with only one goalie and using the different styled handles. If you want to learn to play competitively on a European table, it will definitely take some getting used to.

Just like American made tables, European tables that are high-quality are going to cost you more. Generally speaking, European tables can be pricier than American made models simply because of the materials used. While American tables are made out of composite plastic, plywood, and metal hardware, the fact that European tables are made out of solid wood and metal significantly drives up the price. Additionally, considering the players on European models are hand painted, you can expect to pay a steeper price. However, for the serious foosball table lover, the steeper price is often worth the beautiful craftsmanship.

And the Winner is

When you’re choosing between a European foosball table an American made one, it will ultimately boil down to personal preference. Some players will opt for American tables if they like to play with aggression and speed. Players that have a game strategy that is slow paced and more strategic will choose European made tables.

In many cases, casual players often prefer American tables, not just because it’s what they’re familiar with, but also because it doesn’t involve learning a more precise, new playing system. Bottom line, if you’re a big football fan, it’s definitely worth it to at least try playing a match on a European made table. Just be warned, the first time you play on a European table can be very frustrating since you’ll have to adapt to the single goalie and the lighter telescopic bars.