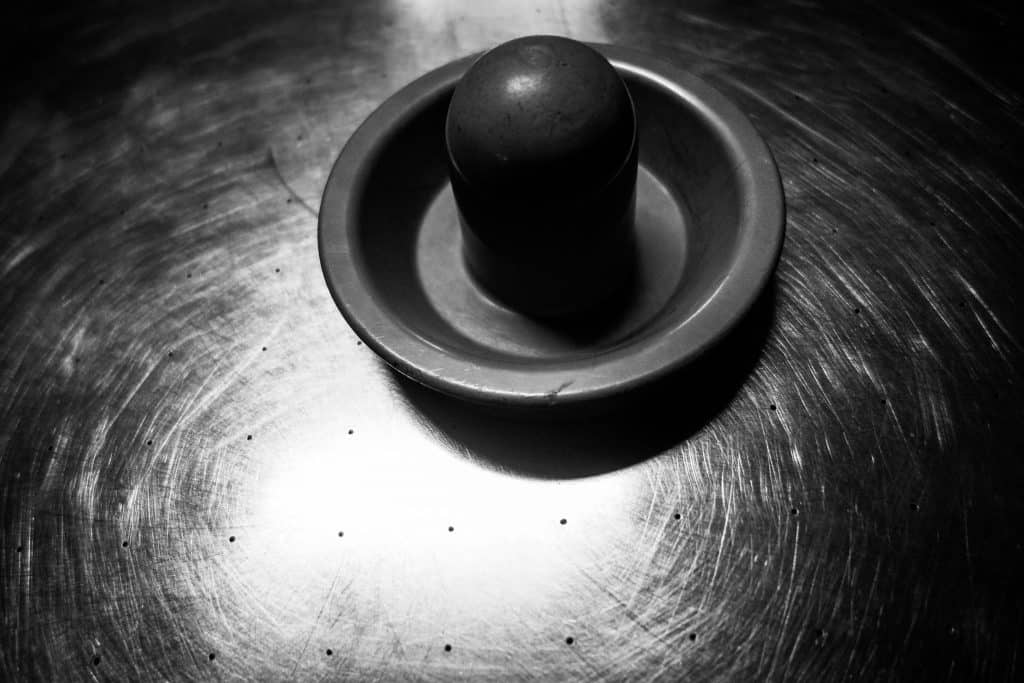 Over the years, air hockey had its ups and downs. It was a total game-changer in the 1970s, but table sales suffered significantly in the 1980s, thanks mainly to the popularity of video games. These days, as people try to find the best air hockey table for home use, the tables have become more popular than ever. But if you don’t know your history or much regarding air hockey’s background, then you may be surprised and a little impressed with how this popular sport has managed to survive being put through the wringer only to rise again stronger than ever, with thousands of dedicated fans and competitors, all over the world.

In 1969 the air hockey invention was finally realized. Three men, who all happened to be huge hockey fans developed a concept for this game. They had an idea to create a miniature hockey game that allowed a small puck to float across the surface of the table, similar to how a real puck slides over the surface of an ice rink. Their idea of a frictionless table surface is really what started it all.

The air hockey invention and concept was developed by three young men in 1969 who were passionate about hockey, and passed to an engineer named Bob Lemineux who made the dream a reality in 1972 by creating a design that worked. As he teamed up with Brunswick Billiards, a major pool table manufacturer, the world saw the first air hockey table. Over the years, the table’s popularity dipped as the 1980s hit and video games became all the rage. But in the end, with the development of the USAA, professional tournaments, and the help of Mark Robbins, a huge air hockey fan, these tables managed to stay relevant and survived the age of video arcade games. These days, air hockey tables are more popular than ever before as manufacturers produce pro-quality tables that you can play on in the comfort of your own home.

So, who exactly invented air hockey? In the late 1960s, three men, Bob Kenrick, Brad Baldwin, and Phil Crossman banded together to develop their concept of a miniature hockey game that consisted of a frictionless playing surface. However, they struggled to figure out how to push air through the perforations in the wooden playing surface.

By 1972, Bob Lemieux, an engineer, who was also an avid hockey fan, took their concept one step further. Lemieux worked closely with Brunswick Billiards, a popular pool table manufacturer. Together, they developed the traditional air hockey table design, adding strikers, a puck and two goal posts. After the release of the first table, the sport quickly took off. Its success is contributed to the innovative design, but the fact that the tables were backed by such a major manufacturer also didn’t hurt.

However, the success of the tables was somewhat of a letdown for the developers who had hopes of air hockey becoming a dedicated sport, much like pool. Instead, the tables were categorized as mainly recreational tables, which is why they were commonly kept at pizza places, arcades, and bowling alleys.

The game’s designers decided to take charge and change the image of air hockey. 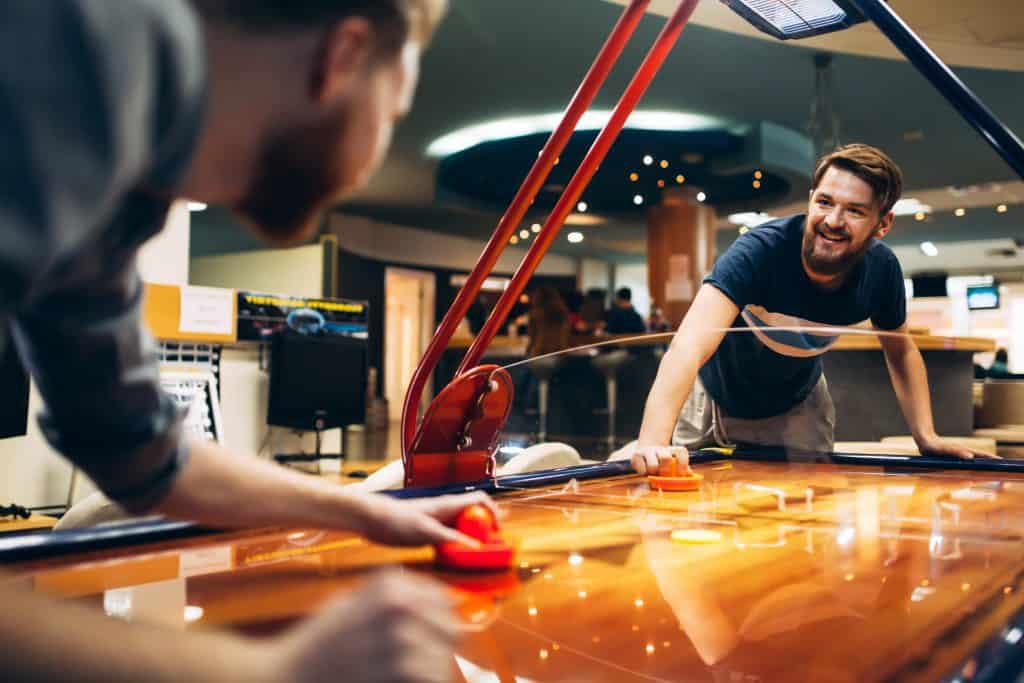 The introduction of air hockey in the 1970s changed everything for hockey fans. As I mentioned earlier, the USAA was formed in order to ensure a certain standard of rules was established for this new sport.

These days, when most people think of air hockey, they picture that large table with the bright lights that’s pretty much a fixture in most arcades and pizza places. However, there are many important tournaments and associations found all over the country.

In 1978, the USAA hosted their own national championship, which was held in Houston, Texas. These days, Texas is still considered by many to be the mecca where many air hockey players retire and originate.

After the first USAA tournament, it was clear that air hockey was now a mainstream sport.

But during the 1980s, the tables were soon abandoned in favor of popular arcade games such as Pac-Man, Frogger, and Galaga. Back then, you couldn’t go to an arcade and not notice the line of players waiting to play these popular games. Meanwhile, the air hockey tables were ignored for the most part, experiencing a significant dip in their popularity. For many, it was clear that air hockey tables were out and video games were in.

This caused many dedicated air hockey fans to wonder if their precious tables would end up being obsolete by the end of the decade.

Mark Robbins a dedicated air hockey fan decided to take charge and posted an ad in a trade publication requesting people to donate used air hockey tables. He then rented a twenty-foot truck in order to pick up as many tables as he could and stored them in a barn located in Minnesota. His hope was to create the ultimate air hockey table. Shortly after rounding up the tables, Robbins contacted US Billiards, which was the last air hockey manufacturer at the time. He requested that they build upon the original air hockey table design and create a modern take on air hockey tables which could once again cause a rise in their popularity.

In 1985, Robbins convinced another company, the Dynamo Corporation, to produce tournament quality tables based on the original design. That first year, only one hundred tables were sold, but that didn’t deter Robbins, who was determined to bring the sport back. By 1993, the company Dynamo began selling the tables by the thousands, thanks to Robbins efforts to keep the sport alive and encourage major manufacturers to help bring the game back.

While it’s true that air hockey had a pretty rough start, these days its mainstream popularity resulted in its sanction as a sport. Now, the Air Hockey Players Association consists of many professional members and competitors.

Modern tables are also available in a variety of sizes and styles, so it’s possible to fit one of these tables in your home, even if you’re short on space. The invention of the best round air hockey tables allow people who want a multiplayer experience to enjoy a totally new way to play the game. Models such as the MD Sports Air Powered Hockey Table are priced affordably and designed for both home or pro-use. This really is an exciting age for air hockey, as the sport has earned a new level of respect and gained a following that’s bigger than ever before.

What is an Air Hockey Table Made Of?

A standard air hockey table features a large smooth playing surface that’s made out of a combination of plastic and wood. The surface of the table is perforated in order to allow air to be pushed through via the motor. This air is what allows the pucks to smoothly glide across the table.

Is Air Hockey a Sport?

Yes. Air hockey is officially a sport that’s governed by the USAA. While some people may classify it as a recreational game, there are many serious competitors who compete in championship tournaments. There are also official rules that have been established by the USAA. These air hockey rules not only include what you can and can’t do during a match, but they also cover striker weight and size, puck size, and air hockey table dimensions.

Can You Touch the Puck in Air Hockey

You can’t touch the puck with your hands when a puck is in play. Generally speaking, there are some very specific rules regarding how you can and can’t hit the puck using the striker. As an example, you are not allowed to bring the striker down on the puck in order to drag it or stop it. This is a violation called topping and it results in an immediate foul that will require you to hand the puck over to the defending player.

The air hockey invention began all the way back in the late 1960s. It began as a concept three young hockey fans had, to create a small table that allowed them to enjoy a miniature game of hockey, and was developed by an engineer who made their dream a reality. The game of air hockey has had its rough patches, especially in the 1980s when video arcade games dominated the market. But thanks to a passionate air hockey fan and Dynamo, one of the leading manufacturers, in addition to the USAA, air hockey is now a serious sport and one that’s here to stay.