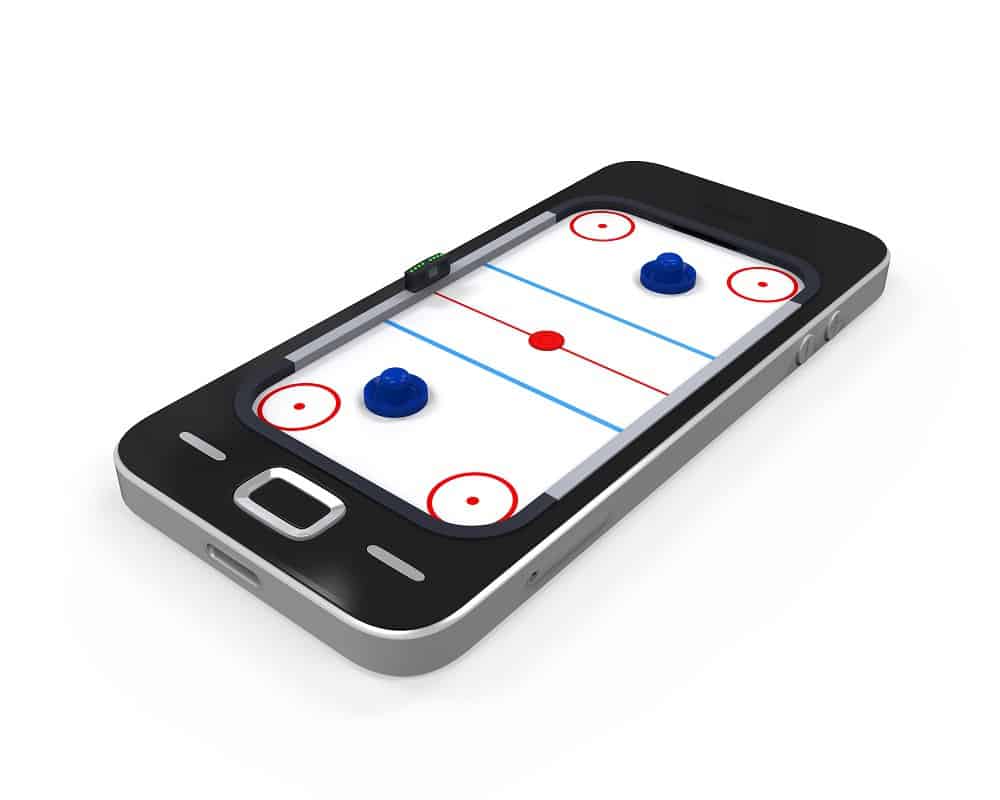 When you don’t have access to the best air hockey table, but you’re itching to play a game, you can turn to air hockey apps, which you can find for both iOS and Android devices. These apps can help you get through a boring meeting, long flight, or can keep you entertained on those long car rides.

Maybe you’re not normally a gamer, but if you’re a true air hockey fan, then even you will love what the leading apps have to offer and can appreciate how they can improve your skillset in real life, including agility, speed, timing, and defense.

At Air Hockey Geek, I’ve done all the research for you, so you can find the top games for each operating system and enjoy hour after hour of realistic gameplay.

If you have an iPad or iPhone, then you’ll love my list of the top air hockey apps that are currently dominating the market:

This game offers a whole new way to enjoy hockey online. The game can be very challenging to play, which is what many air hockey fans are looking for. You can play against friends or the computer. This app also features a quick play mode option for single and two player matches and includes a total of four difficulty levels to choose from, before you advance to the championship mode.

This app is perfect for the avid hockey lover who needs their fix and wants an app that offers realistic game play. With the ability to choose from one or two pucks, single or double players, and a variety of difficulty levels, you’ll quickly find yourself addicted.

If you don’t have anyone to play against, you can take your chances with the computer and perfect your playing skills. In double player mode, you can go up against family and friends and try out some air hockey defense tricks such as wall banks, to spoil the other player’s defenses.

This is an arcade style game that’s very fast-paced and has no rules. You can choose your teammates and hit the ice for some serious action and control up to three players to take down your opposition. You can also choose from a variety of pucks, which can be a total gamechanger.

This is one of the leading air hockey apps on iOS and looks similar to a traditional real-life hockey table, such as the Triumph Fire ‘N Ice.

You can play against the computer or other players and enjoy a challenging, fast-paced match that will really put your air hockey skills to the test.

If you’re a fan of arcade style games, then you’ll love this latest app that also takes your gameplay to a whole new dimension, offering 3D graphics.

For a realistic match of air hockey, put your skills to the test and dive into this very colorful, additive game that will help you improve your playing strategies and basic air hockey playing technique.

If you dedicate a lot of your free time to preparing for an air hockey tournament, but don’t own your own table, playing a realistic air hockey app can help you brush up on important techniques and strategies.

Below, you’ll find a list of the top apps for Android devices that earned a reputation for fast-paced, realistic gameplay.

This top-of-the-line air hockey simulator features high-quality, realistic 3D graphics that make this one of the most addictive and exciting air hockey apps on the market.

You’ll be impressed with the game’s sound effects and graphics that significantly improve the gaming experience. Additionally, there are many difficulty levels to choose from that can put your skills to the test.

This app is perfect for players of all skill levels, especially the avid air hockey player who is looking for a game that can provide the type of challenge they need to test out new and complex playing strategies.

This fun and exciting air hockey app shows impressive detail to graphics and will really keep you on your toes, which makes this game highly addictive. The graphics and the game setup are very realistic and are designed to give the player the real air hockey experience.

The game allows you to try and score as many pucks as possible, for a more fast-paced, challenging match.

You can also work on improving your reaction time, speed, and agility. While you play, work on defending your goal and prevent the enemy from scoring.

You can play against the computer, choosing a level based on your current skill and playing goals. As each match becomes more challenging, you’ll find that you really have to test your skills as a player.

This game features beautiful graphics and intense matches. This is a multiplayer game; however, you can also go head-to-head with the computer. There are different difficulty levels to choose from starting with the beginner level, all the way to the master level.

Fun, fast-paced, and designed for players of all skill levels, this Android app is a great option for the air hockey player who wants to improve their agility and speed and enjoy a challenging match with a friend. If you’re new to the game and don’t own a table, then spend a little time each day learning how to create and develop your playing strategy.

If you loved the original Glow Hockey app, then you’ll fall in love with the returning version that’s said to be more realistic, more challenging, and highly addictive. If you’ve ever played traditional air hockey, then you’ll feel right at home playing this game, thanks to the paddles that are easy to control. The game provides precise paddle control, so you can smoothly move the paddle around the playing field, using only one finger. This level of control gives the game a more realistic feel.

While the game itself looks pretty simple in terms of graphics, the game play is very fast-paced and challenging.

You’ll have a variety of modes to choose from, including double player mode, fast game play, and championship mode. When you challenge another player, you can split the screen, or battle a player via Bluetooth. The game’s developer also made some changes in terms of themes. Players can change the hockey area’s theme, and even the colors of the pucks and paddles, for a more customized feel.

This game allows you compete with other players in real-time or you can play against the computer for a more challenging match.

The app features an intuitive interface, so it’s also a great choice for beginners. You can choose from different environments, whether it’s space or on the ice. You can also select the difficulty level, based on your current skills and playing goals.

This game is free to download, however, you’ll have to deal with ads.

This game is highly customizable, allows you to test out new playing strategies, and maximum goals per match, so you can really challenge yourself as you improve your defense, speed, and agility.

Of course, this air hockey game has a Halloween theme. This app provides a fun way to improve your air hockey skills, in an exciting, spooky, Halloween setting. You can increase your speed and agility, while enjoying the beautiful graphics as you challenge yourself and advance to unlock fun new levels.

If you don’t have access to an air hockey table, then these air hockey apps can help fill the void. These games each feature intense game play, fast-paced action, high-quality graphics, and can give you the opportunity to brush up on your playing skills, whether you play against the computer or a buddy.